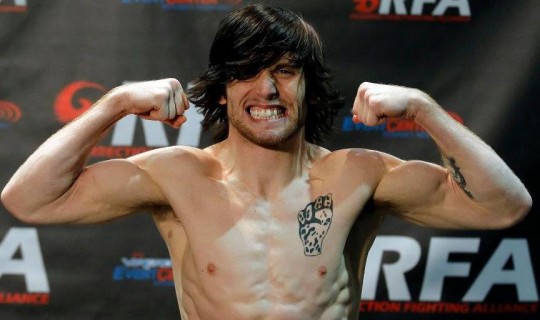 Just three fights into his professional mixed-martial arts career Tim Elliott (8-2-1) had a record of 0-2-1 and was thinking about calling it quits.

And while some might have indeed walked away, Elliott, a decorated collegiate wrestler, decided to stick with the sport knowing that the reason for his losses was due to his lack of proper training.

Since then, the 25-year-old has gone on to win all eight of his subsequent fights, which include a knockout win over former UFC lightweight champion Jens Pulver (25-16-1) at Resurrection Fighting Alliance 1 last December.

Elliott’s newfound success in the cage garnered the attention of the UFC, and after Darren Uyenoyama (7-3) was forced to pull out of his scheduled UFC on FOX 3 bout against The Ultimate Fighter 14 winner John Dodson just weeks before the fight, the promotion called on Elliott to step in.

This Saturday, May 5, Tim Elliott will make his UFC debut against John Dodson (12-5) at UFC on FOX 3 emanating live from the IZOD Center in East Rutherford, N.J.

ProMMAnow.com (www.prommanow.com) recently spoke with Elliott about his upcoming fight, turning his career around, and what it’s like preparing for his UFC debut on such short notice.

PRO MMA NOW: Starting off can you talk about how you got involved in MMA and what led you to pursue a career in the sport?

TIM ELLIOTT: I started wrestling when I was younger. I wrestled at Labette Community College for two years. I ended up winning a national title for Labette and getting outstanding wrestler in the nation. From there I went on to the University of Central Oklahoma where I All-Americaned two more times. I stuck around for another year as a coach. I missed competing so much that I took an amateur fight and I won in about 30 seconds. I really enjoyed it, and then some guys offered me a pro fight. It was pretty good money and I probably shouldn’t have taken it, but I wasn’t very bright and I jumped in there with a guy who had a lot more fights than me. I ended up getting a draw, and then I had two losses immediately after that so I had a real struggle when I first started. I didn’t have anything other than wrestling. I just went in the cage and tried to take people down and I got beat up.

PRO MMA NOW: Can you talk about that point early on in your career where you were 0-2-1, and did you ever have any thoughts about quitting at all?

TIM ELLIOTT: It was rough. I had some thoughts of quitting, but I knew that the only reason I had lost was because of my lack of training. I had only done wrestling. It was really hard too because my girlfriend, she’s also a fighter, was actually 4-0 when I was 0-2-1, so it was really tough. I was kind of getting it at both ends. But I got into a gym where I could learn some striking a little bit and a little bit of jiu-jitsu and I never really got too down on myself. I had been beaten in wrestling so many times that losing wasn’t really a problem for me. I wasn’t really scared of losing. So I just stuck with it and now finally I’ve come up here to Kansas City and Grindhouse MMA where I’ve got top level coaches and top level training partners. I just get better and better every day.

PRO MMA NOW: Now how did you find out about the fight and did it surprise you at all?

TIM ELLIOTT: It didn’t really catch me off guard. Now that I’m here at this new gym they have a great management team behind them, so I knew that if I stuck with this team here that it would only be a matter of time before the UFC called. The problem was that after I won my last fight I was flying out of the country. I was going to Mexico to spend the rest of the month with some friends and family down there. So I flew into California and the next thing I knew Joe Wooster, from the management company here at Grindhouse, called me and asked and asked how I would feel about fighting John Dodson in the UFC. I said yeah immediately, and jumped right on it.

PRO MMA NOW: Can you talk about how you are getting ready for a fight like this on such short notice?

TIM ELLIOTT: Yeah, I mean as soon as they called me and told me that I had the fight I jumped on the next plane out of California and I just hit it really hard. I got off the plane and got right into the gym. I’ve been doing two and three practices a day trying to get ready. It is short notice but I think that with the coaches that I have here and the training partners that I have it’s not going to be a factor.

PRO MMA NOW: So what’s it like having two fights like this back to back, and do you think that works to your advantage when taking a fight on short notice like this?

TIM ELLIOTT: Yeah, it really works to my advantage because I had a camp before my last fight and it was so short that I didn’t take on any injuries or anything. It really worked out well. I asked my coaches immediately if they thought that this was a fight that I could win and all of my coaches said yes. I put all of my faith in them, and if they think I’m ready then I’m ready and I will be ready.

PRO MMA NOW: How do you feel that you and Dodson sort of match up heading into this fight?

TIM ELLIOTT: I think that he’ll be a lot faster and more explosive than me. He’s probably quite a bit better striker than me, and has more experience, but I think what I bring to the table is that I will have some size on him. I also have the ability to slow a fight down to my pace, and I’ve got good hand control. I feel like if I can get a hold of him and get him up against the cage that I can work my stuff. All in all I think it plays out to be a very exciting fight and that’s a win/win for me. If I go out and we have a super exciting fight and I still lose that still kind of secures me some fights in the UFC and that’s my goal. I don’t just want to be the guy that they bring in and call last minute to fill in for people. I want to be the guy that they’re trying to find fights for.

TIM ELLIOTT: Yeah, I would like to thank Grindhouse MMA here in Kansas City. These guys have shaped and molded me from just a hardheaded wrestler to a skilled MMA fighter. I also want to thank the head coach up here Brian Davidson and James Krause, who has fought on The Ultimate Fighter. These guys just take a lot of time out of their lives and out of their day just to spend with me, and it being such short notice for this fight, I’ve had round the clock help from these guys. They’ve just been super good. I mean I’ve just doubled from where I was when I first got here to where I am now. I’m a totally different fighter.