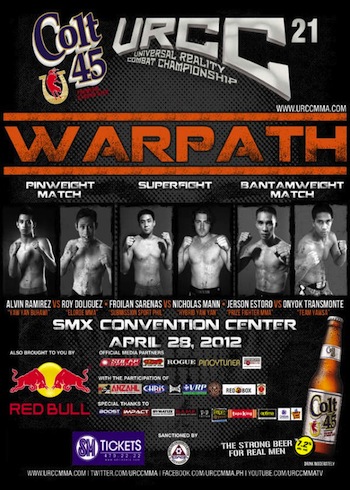 I always thought the Philippines was a pretty cool and badass place to live in. This is the land where the beer is cheap, the food is awesome, the men are bad to the bone and the women are hot. Oh yeah, and there’s the URCC, the longest running MMA promotion in Southeast Asia. These bad boys have been kicking rear ends and taking names for 10 years.

Their “URCC 21: Warpath” event took place Saturday at the SMX Convention Center in Manila, the Philippines and to say that the fights were pretty insane would be a big understatement. These Filipino fighters are completely nuts. They don’t seem to get knocked out and they continue fighting even when it’s pretty obvious they’re gassing out. There is no quit in them.

From the first fight till the last fight, everyone seemed to put their hearts and souls into their fights. It was truly humbling and undoubtedly exciting to see these warriors leave it all in the ring.

The night started off on a high with Mark Dialogo going one on one with Rasel Iniong. The card couldn’t have gotten started with a better fight. These two really put on an exciting grappling match with some ample ground and pound action and crazy transitions.

The fight finally ended with Rasel Iniong winning via armbar in the second round. That fight set the pace for the rest of the fights of the event. The rest of the event saw the very popular Team Buffet, comprising of Mark Striegl and Will Chop, remain red hot by defeating Alcer Lozada and Angelito Manguray respectively.

We also witnessed a stand up war between Jerson Estoro and Reysaldo Transmonte and a huge upset when Roy Doliguez defeated fan favorite Alvin Ramirez. In the main event, Froilan Sarenas lost to Nicholas Mann via unanimous decision in a hard fought contest.

On top of the in ring action, everyone seemed to be pumped that Mario Sismundo really looked like Manny Pacquiao. So much so that they were chanting Manny throughout the fight. Too bad he didn’t look like Manny after the fight. The dude took such a pounding he looked like Diego Sanchez on a bad day.

By the way, the URCC ring girls are HAWT. We’re talking “forget about beer” kind of hot. We heard that it’s pretty hot right now in the Philippines and we’re blaming it on these chicks. I know you cringed when you read that corny line but hey, it proved our point.

All in all, it was a very good event. While it didn’t have big names on the card, the matches made were very good and the styles of the fighters being paired up made these fights awesome. URCC’s been around for 10 years and we can see them going strong for many more years to come.

Here’s the results from the event:

Will Chope Vs. Angelito Manguray (Lightweight fight)
Will Chope wins via rear naked choke in the 1st round

Mario Sismundo Vs. Miguel Alo (Featherweight fight)
Miguel Alo wins via armbar in the 2nd round

Adam Cacay Vs. Fred Lim (Pinweight fight)
Adam Cacay wins via armbar in the 2nd round.