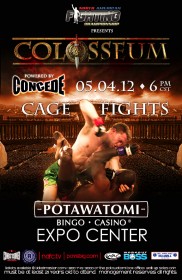 (Milwaukee, Wisconsin, USA): Today, the North American Fighting Championship (NAFC) announced that its next electrifying fight event, “Colosseum,” will take place on Friday, May 4th at the Potawatomi Expo Center in Milwaukee, Wisconsin. The fight card will feature several Strikeforce veterans, as well as local favorites, showcasing sixteen bouts total. Fighters competing at “Colosseum” include Milwaukee favorites Rick “The Gladiator” Glenn and “The Phenom” Sergio Pettis, as well as Strikeforce vets Charon Spain and Dustin Ortiz. With many stars on the rise showcased on this action-packed event, the NAFC’s commitment to building up the sport of MMA is clear!

Doors will open at 5 PM, with the undercard starting at 6 PM, and the main card beginning at 8 PM.  Tickets can be purchased online at Ticketmaster.com, by calling 800-745- 3000, in-person at Potawatomi Bingo Casino’s Northern Lights Theater Box Office, and at the door the night of the event.Tickets are $100 VIP Cageside ($110 door), $60 Floor Reserved ($70 door), and $35 Bleacher General Admission ($40 door). For more information, including a seating chart, visit http://nafc.tv/ticketing.php.

“Some of the best MMA fighters in the world train right here in Wisconsin,” stated NAFC Promoter Duke Roufus. “I want to give them the stage to prove just that, and as we’ve seen time and again, the NAFC fighters never disappoint.”

In the “Colosseum” main event, Milwaukee favorite Rick “The Gladiator” Glenn looks to take the next step in his climb towards the big show when he locks horns with Strikeforce veteran Charon Spain. The co-main event will feature another Strikeforce veteran in Dustin Ortiz, as he tangles with Josh Robinson. Ortiz, who holds a 2-0 record in Strikeforce, recently joined the vaunted Roufusport fight team in Milwaukee. Also on the card will be the undefeated “Phenom” Sergio Pettis, who is hungry to show the world that he belongs in the spotlight just like his big brother, UFC lightweight contender Anthony “Showtime” Pettis.

Rick Glenn moved to Milwaukee to become part of the vaunted Roufusport fight team. Still a youngster in the sport at only 23 years old, “The Gladiator” has quickly become a well-rounded fighter known for his talent and hard-working attitude. In short, he is one of Roufusport’s top prospects. He holds an 8-2 record with seven finishes, and hasn’t been beaten in his last seven straight bouts. With a win over Spain, he is sure to gain notice from promotions like the UFC, Strikeforce, and Bellator.

Dustin Ortiz knows what it means to be right on the cusp of reaching your dream. About a year ago, Ortiz faced Ian McCall in respected regional promotion Tachi Palace Fights. It was a hard-fought bout, but the Nashville-based flyweight came up short via decision. Now, McCall is scheduled to fight for the first-ever UFC Flyweight Championship. Ortiz rebounded from the loss with a TKO stoppage of Josh Rave, putting him right on the cusp of being ranked in the top ten of the 125-pound weight division. With a win at “Colosseum,” he will make a case to get into the UFC and possibly avenge his loss to McCall.

Fighting is in the blood of Sergio Pettis. It has been well-publicized that “The Phenom” is the younger brother of UFC lightweight star Anthony “Showtime” Pettis. A solid kickboxer, Sergio has experienced a fast start to his career, stopping all three of his opponents (two by TKO via head kick, one by submission). Now, he’ll face Chris “Bad Boy” Haney with his undefeated record on the line. What an opportunity for this youngster as he moves his way up the card and more and more into the spotlight.

Here is the full fight card as it stands:

The NAFC is operated by famed fight trainer Duke Roufus and his business partner and producer Scott Joffe. Roufus is one of the most recognizable MMA and striking coaches in North America, and is considered to be one of the top trainers of Muay Thai kickboxing outside of Thailand. Roufus also runs the Roufusport Fight Club team, which includes UFC stars Alan Belcher, Anthony “Showtime” Pettis, Erik “New Breed” Koch, and Pascal “Panzer” Krauss.

For more information on the NAFC, please visit http://www.NAFC.tv/

3 thoughts on “NAFC ‘Colosseum’ invades Milwaukee on May 4th”