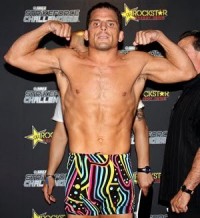 Ft. Lauderdale, Florida (USA): It was revealed today that Apex Sports Agency (ASA) has agreed to terms with Strikeforce veteran Lyle “Fancy Pants” Beerbohm. ASA will now be handling Beerbohm’s management and sponsorships as a result of this agreement.

Regarding coming on-board with ASA, Beerbohm said, “I have heard great things about Apex and what they do for their fighters. It is my goal to grab championship gold in the UFC, and with ASA and my team backing me, it’s only a matter of time before I reach the top of the mountain!”

“I am very excited welcome Lyle to our team,” stated ASA CEO Jason Chambers. “He is an extremely tenacious fighter with a tremendous work ethic…a bad combination if you are his opponent.”

Known for his unique fight shorts, his aggressive style, and his colorful backstory, Beerbohm has carved out an impressive 16-2 pro MMA record, including a combined 5-2 tally in EliteXC and Strikeforce. He’s faced some top competition in his young career, already locking horns with well-known fighters such as Shinya Aoki, Pat Healy, Duane “Bang” Ludwig, Vitor “Shaolin” Ribiero, Rafaello Oliveira, and Gerald Strebendt. Yet, just becoming a professional MMA fighter was a victory for “Fancy Pants.”

After spending a year in a Washington prison due to a drug addiction, Beerbohm began his MMA just seven days after his release. Drugs and bad choices almost derailed his life for good, but he turned things around with the help of family and God. Since then, he has been profiled in the well-received “Fight Life” documenatry. On the fight side of things, “Fancy Pants” opened his pro career with a 15-0 run, and after losing two of his last three, he decided some changes were in order. Now with ASA, Beerbohm hopes to get back on the winning track and showcase his unique skill set on a national stage.

ASA has quickly garnered a strong reputation in the MMA world, working with stars on the rise such as UFC fighters Chris Clements, Clifford Starks, Carlo Prater, and Matt Lucas, as well as established fighters like Karo Parisyan, Drew Fickett, Jorge Gurgel, and Zoila Gurgel.