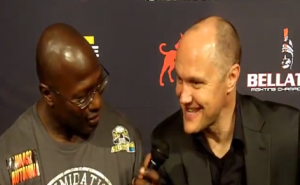 ProMMAnow.com (www.prommanow.com) reporter Dr. Rhadi Ferguson was on the scene at the I-X Center in Cleveland, Ohio, this past weekend for Bellator 66. In addition to speaking with Bellator CEO Bjorn Rebney before the fights, Dr. Ferguson also sat down with Mr. Rebney after the fights to recap the event and discuss the future of Bellator Fighting Championships and their fighters.

In part one, Rebney talks about the Brian Rogers vs. Andreas Spang fight, Eddie Alvarez vs. Shinya Aoki and Rick Hawn’s KO of Lloyd “Cupcake” Woodard. Rebney addresses the probability of creating a women’s 125 pound division for the organization and names several ladies that could compete in the division. Rebney talks specifically about Jessica Aguilar, what she has meant to Bellator and her upcoming fight with Megumi Fuji scheduled for Bellator 69on May 18 in Lake Charles, La.

In part two of Dr. Rhadi Ferguson’s in-depth interview with the CEO of Bellator Fighting Championships, Bjorn Rebney discusses the future of Eddie Alvarez following his first round TKO over Shinya Aoki at Bellator 66. Rebney says Alvarez has one fight left on his contract and greatly enhanced his value by defeating one of the world’s top lightweight fighters. Rebney explains how Alvarez has been with the company since the beginning and wants the best for him, even if it costs the company’s pocketbook a little more.

Rebney discussed the purity of the Bellator tournament system compared to other organizations where so many other factors are involved. He explained why fighters should not have to beg for title shots but feels what they do inside the cage should determine their contender status.

“What’s the deal with Hector Lombard?” asks Dr. Ferguson at the beginning of part three of his in-depth interview with Bellator CEO Bjorn Rebney. Mr. Rebney says he believes Lombard is the best middleweight in mixed martial arts, and whether he ends up signing with the UFC or Bellator decides to match their offer and keep him, he believes Lombard will continue to prove he is the best fighter at 185 pounds.

Rebney makes no bones about saying he absolutely believes Lombard would defeat Anderson Silva. Rebney discusses Bellator’s role in matching the UFC’s offer, says he owes it to Lombard to make a decision quickly and will ultimately decide if they want to keep the current Bellator middleweight champ or let him go to the competition.