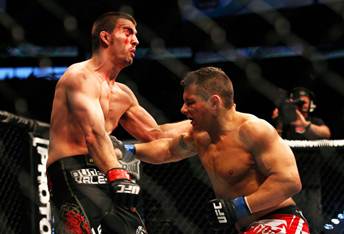 UFC 145 was one of the biggest MMA events of the 2012 campaign, and Clements made a solid impression on fight fans. It was a hard-fought win for the Canada native, but he withstood Wisniewski’s attack, utilized his impressive standup skills, and had his hand raised at the end via split-decision.

“I’m happy with the win, but not satisfied with my performance,” said Clements. “I was too defensive with the wrestling, and I got a bit too wild with my striking.

“Keith is a really tough, durable guy. I knew he was going to be hard to finish,” he added.

ASA CEO Jason Chambers said, “Chris is a tremendous striker, an exceptionally entertaining fighter, and a great new dad to boot! We are proud to have him in the Apex Sports Agency family, and we look forward to his next bout.”

It was only the first decision of Clements’ career, but with his first UFC win under his belt, “The Menace” is excited to move forward.

“As for what’s next, I’m going to take a few weeks off to enjoy being a father, and then get back to the gym to fix some things I’m not happy with. No idea when I will get the call for my next fight, but I want to be ready when I do.”

Now 11-4, “The Menace” is prepared to take the next step towards his ultimate prize: the UFC Welterweight Championship!