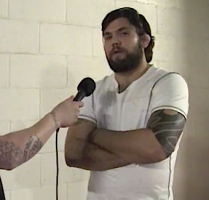 Drysdale discussed playing both the roles of fighter and coach, he talked about the term “martial arts” and what it means to him, and also discussed moving to his new gym and working with boxing coach Gil Martinez (who we also interviewed at this event).

A long-time BJJ practitioner  and winner of numerous world championships, Drysdale is also 3-0 as a pro MMA fighter with all three wins coming by way of first round submission. Drysdale explained why he withdrew from his scheduled May 11 fight against Isaac “Ike” Villanueva (7-6) at Legacy Fighting Championships 11, and said the plan is to return to action in July (scheduled for July 13) against Villanueva at Legacy Fighting Championships 12.

Follow Robert Drysdale on Twitter at @RobertDrysdale and visit www.DrysdaleBJJ.com for more info on Drysdale’s training academy in Las Vegas or one of his many affiliates around the world. Learn more about Legacy Fighting Championship on their website at www.legacyfights.tv and follow them on Twitter at @LegacyFighting.