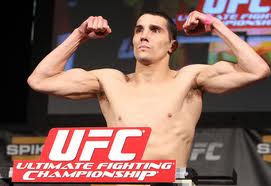 Today UFC officials confirmed that bantamweight fighter Roland Delorme (7-1) will be stepping in to fight Nick Denis (11-2) at UFC on Fox 3. Denis was originally scheduled to fight Johnny Bedford (18-9-1) who has suffered an injury, the nature of the injury is not yet known.

In addition to this announcement the UFC has also confirmed the flyweight match-up between Tim Elliot and John Dodson which was previously covered on ProMMANow.com

UFC on Fox 3 is scheduled to take place on May 5th at the IZOD Center in East Rutherford, N.J. The event will be headlined by Nate Diaz and Jim Miller who will go toe-to-toe in a lightweight brawl.

Nick Denis made his UFC debut in January of this year at UFC on FX 1 event. The 28-year-old earned “Knockout of the Night” honors with a first round TKO victory over Joseph Sandoval. Nick Denis has spent most of his MMA career fighting on the Canadian and Japanese circuits floating between both the featherweight and bantamweight divisions. Nick  is currently 4-1 in his past five fights and will now look to build off his first UFC victory.

TUF 14 competitor Roland Delorme had his first official UFC fight at The Ultimate Fighter 14 Finale in December 2011. The Canadian took on Josh Ferguson and ended the fight in the third round with a rear naked choke submission. Delorme’s only career loss was against Eric Wilson at CFC: Canadian Fighting Championship 6 which was held in October 2010. He now has the chance to pick up a second consecutive UFC victory and begin his climb up the bantamweight ladder.