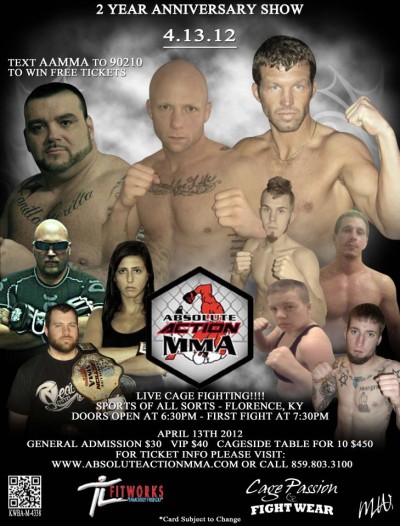 Absolute Action MMA celebrated a milestone Saturday night as Absolute Action MMA 25 marked the promotion’s two year anniversary. Touted as one of the best promotions in Northern Kentucky and the  Greater Cincinnati area, AAMMA returned to Sports of All Sorts in Florence, Ky., with a night filled with some of the best talent in the Bluegrass State. Two amateur title fights grace the card as well as three professional bouts.

The night started as AAMMA celebrated the life of Chris “Slaughterhouse” Smith. Smith passed away on April 5th after a tragic car accident in Portsmouth Ohio. Chris was the former AAMMA heavyweight  amateur champion.

Nine fights cleared the Kentucky Boxing and Wrestling Authority and we will have the results and cage side play by play of the amateur title fights and all three professional fights.

Round 2: Fogg starts the round with a right hand and Ryan tries to counter. Fogg takes Debelak back into the cage.  Fogg picks Debelak up again and walks him across the cage for a big slam. Ryan looks to go back to the guillotine but Fogg drops him again. Fogg trys to throw some knees and smothers Debelak. Debelak is hurting. Fogg brings some more shoulder pressure and Debelak is out.

Round 1: Fighters showing some respect and try to size each other up. Decker starts the action as he throws a kick and takes Fritz down. Decker locks in a tight guillotine but Fritz pops out.  Fritz answers with his own guillotine but can’t hold it. Decker throws some light shots to the body of Fritz.  Decker gets to his feet briefly and throws some shots. Fritz gets control but the round ends.

Round 2: Round 2 starts with a flurry of punches exchanged. Fritz’s left eye looks nearly swollen shut. Decker shoots for takedown but Fritz stuffs it. Decker pushes Fritz to the cage and lands a good knee. Decker escapes and both guys start throwing wildly. Decker pulls Fritz down and Fritz loks for the heel hook.  Both fighters are knotted up and Decker ends the round with several shots to the face of Fritz.

Round 3: Fritz goes for a head kick but us off the mark. Decker answers with one of his own. Fritz connects with a knee but Decker gets the takedown. Fritz looks for the arm triangle and Decker pops out.  Fritz gets a sweet armbar but Decker scrambles out of it. Decker looks to go back to the guillotine. Decker is looking to mount some offense from top position but Fritz looks very flexible and seems to be at ease. Fritz locks in another armbar and Decker is saved by the bell.

Round 4:  Decker starts with a front kick that  misses. Fritz offers up a knee but Decker snatches it up.  Fritz gets a good gash across his forehead. Fritz gets a guillotine of his own but can’t hold it. Decker works from the top position but Fritz has solid defense. Fritz looks for the triangle as Decker lands some body shots. Fritz is a submission machine as he looks for an armbar. Decker rolls out and lands some short punches.

Round 5:  Fighters trade leg kicks to the outside thight. Decker bull rushes Fritz into the cage and looks for a takedown. Fritz is showing top notch defense. Decker goes for a guillotine again and once again Fritz escapes. Fritz goes for a triangle and Decker throws knees to the ribs of Fritz. These guys are showing excellent stamina. Decker ends the fight with a several shots to the temple of Fritz. We go to the judges decision.

Round 1:  McIntosh misses on a leg kick and gets the take down of Maiani. Maiani gets a slam and McIntosh goes for a triangle choke. McIntosh gets a solid armbar and Maiani groans in pain. He escapes the submission attempt but finds himself in another triangle from McIntosh.McIntosh is controlling the action from the bottome by constantly looking for a submission. Maiani can’t mount any offense for trying to scramble. Maiani gets side control  and lands a shot to Ryan’s face. McIntosh really wants the triangle choke. He throws elbows to the face of Maiani. McIntosh is relentless with his striking. As the round ends it is appearant to the crowd that Maiani’s elbow is dislocated.

Ryan McIntosh defeats Joe Maiani, Maiani can not answer bell for Round 2 due to injury

Round 1:  Moell shoots for the takedown and mounts Spencer.  Moell throws bombs from the top and gets the back of Spencer. Spencer gets out of the rear naked choke. Spencer turtles up and Moell starts throwing big punches. He gets the back once again of Spencer and he cannont escape this time. Spencer taps out.

Round 1: Davis comes out with heavy punches and displays incredible stand up. Franklin tries to tie Davis up to slow him down but Davis is very aggressive.  Davis opens up a huge cut over the right eye of Franklin and the blood pours out. Franklin signals he can’t go on  and the fight is over.