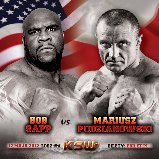 It is one of the two welterweight fights at KSW19. Two of the most decorated Polish fighters in this division will showcase their skills for the fans. We can officially confirm that Marcin Naruszczka will face Borys Mańkowski at KSW 19 on May 12th in Lódź’s Atlas Arena.

It will not only be Naruszczka’s KSW debut but also his first bout at seventy-seven kilograms. Now training in the MMA Okniński Warsaw team, Marcin began his MMA career in Arrachion MMA Olsztyn under Paweł Derlacz and Szymon Bońkowski coaching duo. When he moved to Warsaw, he started his co-operation with renowned trainer Mirosław Okniński.
Naruszczka competed at both light heavyweight and middleweight in his previous professional outings. He is the current Respect FC champion and his MMA record stands nine wins and zero losses. – My dream came true. I’ve always wanted to fight for KSW along with my friends Mamed and Aslambek. I will fight my heart out and I will try to make my fight against Borys memorable – 29-year old Naruszczka promises.

Borys Mańkowski is a stellar wrestler, who makes the return to KSW after a two-year break. Ankos Zapasy Poznań product competed in the KSW 14 lightweight tournament in 2010. This time Andrzej Kościelski’s protegee will fight in his natural under seventy-seven kilograms weight class. – Marcin is a bit of a chaotic fighter. He usually fights at light heavyweight, so he’ll have quite a few kilograms to drop – Mańkowski says.

Naruszczka versus Mańkowski looks to be an intriguing clash. Both fighters want to prove they belong in KSW and they both promise to have an exciting fight. There is no reason not to believe them. After all Naruszczka was nominated for the 2011 Heracles award in the Breakthrough Fighter of the Year category, while Mańkowski claimed the award for the 2011 Best Fight of the Year.