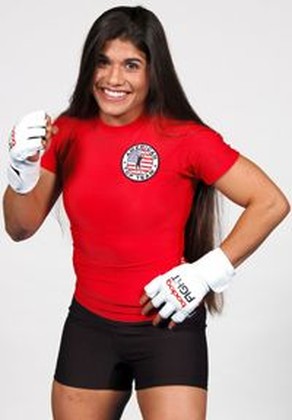 CHICAGO, Ill. (April 9, 2012) — The focus of the mixed martial arts world will be on the Bellator cage on Friday, May 18 as the long-awaited battle between No. 1 ranked women’s 115-pound fighter Megumi Fujii takes on No. 2 ranked Jessica Aguilar at Bellator 69 LIVE from L’Auberge Casino Resort in Lake Charles, Louisiana. The night will also feature the finals of the $100,000 Bellator Lightweight Tournament, as well as a Heavyweight Tournament qualifier as knockout specialist Ron Sparks takes on rising star Kevin Asplund, who is currently riding a 15-fight win streak.

“Jessica vs. Megumi is a fight between the two best female fighters in the world and we wanted to schedule it for quite some time,” said Bellator Chairman & CEO Bjorn Rebney. “L’Auberge has been a tremendous host for us in the past, and with a fight of this magnitude on the card, I expect fireworks on May 18.”

Tickets for the event are now on sale and can be purchased online at Ticketmaster.com or by visiting The L’Auberge Casino Resort Box Office. Tickets are priced from $40-$65. The event will also be broadcast LIVE starting at 7 p.m. CST on MTV2 and in commercial-free HD on EPIX. Doors open at 5:00 p.m. CST, with the first fight scheduled for 5:30 p.m. CST. The preliminary card, featuring the area’s top talent will be streamed LIVE and FREE around the world on Spike.com starting at 6 p.m. CST. Fans must be 21 years or older to enter the Event Center

Currently riding a four-fight win streak that includes victories over Lisa Ellis-Ward and Carla Esparza, Aguilar has had her sights set on Fujii for quite some time. Fight fans have been clamoring for this fight for nearly two years, which is a fact not lost on Aguilar.

“I am completely focused on becoming the best 115-pound female fighter in the world, and this fight with Fujii is going to go a long way in proving that,” Aguilar said. “I can’t fully put into words how excited I am to get into the cage with Fujii, and show everyone that I am one of the best female fighters in the sport.”

For “Mega Megu”, the Japanese-born submission ace is still looking for closure after her hotly debated split-decision loss at the hands of reigning Bellator Champion Zoila Gurgel. With three victories since the defeat, Fujii is looking to keep the momentum going with a dominating win against Aguilar at Bellator 69.

The night also features a tournament qualifier for Bellator’s $100,000 Heavyweight Tournament when fan favorite Ron Sparks and the 15-1 Kevin Asplund meet in the Bellator cage. L’Auberge fans should be familiar with Sparks, as the massive heavyweight delivered a brutal knockout to Mark Holata at Bellator 52 early last year (Watch Here: http://www.youtube.com/watch?v=jwx6ZSRLiM4). Spark’s knockout power will be on full display at Bellator 69, as the Louisville native looks to punch his ticket into Bellator’s next Heavyweight Tournament.

Local favorite and Lake Charles native Josh Quayhagen will also be back in action, looking to stay perfect with Bellator when he faces the red-hot Cliff Wright, Jr., who is riding a four-fight win streak. Quayhagen shocked the MMA world with a convincing win against one of the best kickboxers in the world in Cosmo Alexander, and will continue his ascent up the lightweight ranks with another win.