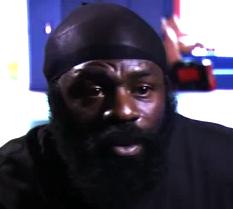 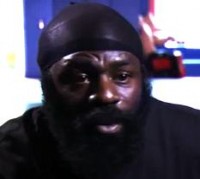 It was a pretty good back and forth affair with both guys landing some hard punches and solid combinations. Most people agreed Green was ahead on points going into the fourth round and was on his way to a decision victory. Then with just 3 seconds left in the bout, Slice lands a left hook, right hook, left uppercut combo and Green goes down and out.

Watch the full fight below with a post-fight interview with both fighters at the end.

With the storybook ending, there has been a large outcry that Green took a dive. He took to Facebook to defend himself:

“Finally the cloudiness of a KO Saturday night is wearing off mostly…. Still got a BROKEN ORBITAL BONE (even though I was supposedly taking a dive the whole fight and Kimbo wasn’t REALLY fighting me apparently until the very last combination which he lands 3 consecutive punches ON THE BUTTON which turned out my lights)

Well, I took this biggest opportunity I ever have been given, and gave it my all. In the end, Kimbo Slice Placed 3 consecutive punches together and all three connected clean. AFTER I was winning on all 3 judges score cards..

I put everything on the line with this fight, to have thousands of people hating on me claiming I took a dive. smh. I can not believe this, and it really makes me sick.

700,000 Youtube views of people watching ONLY THE LAST ROUND (after I was gassed in the second round) where I got KO’d and 80% of them claiming I took a dive with ONLY THREE SECONDS LEFT!!!!

….. THREE SECONDS LEFT…. Who does that? seriously. . . Now I have a 60 day medical suspension and can not fight the last person who beat me in an MMA Fight 8 fights ago which leaves that promoter in a bad position :( Which I am sorry for. (A re match I have also been BEGGING for, for an entire year now) And I will be missing out on an opportunity to make the most money I EVER have in my hometown with all of my recent success of 7 consecutive Wins. (Sponsors backing me up, Selling more tickets than I EVER HAVE at home, my biggest purse yet to date with the organization, and lastly, the REVENGE of beating the guy who beat me at home..

I KNEW I HAD TO make it to a decision, so I only got a 7 day suspension, and i could fight my upcoming fight April 13, (20 days after Kimbo)

I took the fight against Kimbo, because I truly don’t feel he is a legit pro fighter…. He is a savage brawler, and also BACK IN HIS DAY, was very very dangerous…. Now he is old, and I knew I could last a decision… No way did I think I could actually WIN IT. Then at the end of the first round, I felt myself avoiding his bombs, and finding a home for my punches.

THEN I also thought that he would REALLY be out of shape, because his original opponent had backed out and they hadn’t found a replacement yet, so I figured he hadn’t been training THAT hard.

Avoid the BIG punches, and last a DECISION= Make a HUGE name for yourself, especially for me being a submission guy! You can see how hard he was throwing in the first round when he was fresh, and that he was trying to take my head off…. I think I got in his head at the weigh ins getting in his face, and telling him “I aint scared” and repeating that in the ring at fight TIME!

I ate a couple good punches early, and felt him getting tired. after landing good shots on him, I eventually started telling him “You wasn’t expecting THIS was you?!?!” Trying even more to get in his head, and make him doubt himself, and feel threatened.

And thanks to those of you who take the time to congratulate me. Those who KNOW I would NEVER take a dive in ANY fight.

I ALMOST beat that Monster. Think I BS’d? BOOK THE FIGHT AGAIN. with an actual CAMP to prepare for him…. Even on only 2 weeks notice. I will SMOKE that fool. PEACE”