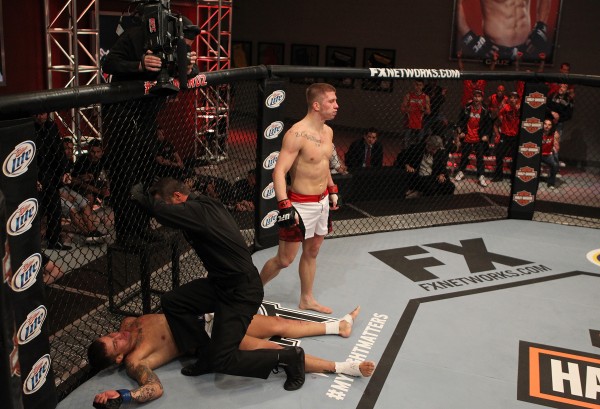 Coach Cruz’s number one pick, Justin Lawrence, took care of business Friday night by knocking out Team Faber’s number two pick, Cristiano Marcello, with a left hook 3:16 into the second round on episode 3 of The Ultimate Fighter Live on FX. The win moves Team Cruz to 2-0.

“Cruz’s first pick didn’t disappoint tonight. Lawrence fought a cautious but solid fight. Picked Marcello apart from the outside and landed big shots. Marcello literally had no offense whatsoever tonight and Lawrence put him away halfway through the second round. Lawrence came out with a knockout victory, no injuries and very much one of the top contenders for the TUF Live Finale.”

Coach Cruz shared his thoughts on the fight and how he feels about taking out two of Faber’s guys in a row:

“I think again Faber underestimated the way we coach and the way that we fight. Regardless of what he says or thinks about himself, he’s a cocky dude. It’s worked out so far for our team. It’s about confidence in my team, about how good they are, and about how good they listen. I’ve got a good team. Lawrence fought a perfect fight; he listened to the game plan perfectly, there’s nothing I can say, everything was perfect.”

Despite Marcello’s loss, Faber said he was proud of his fighter, and well — used the opportunity to take a shot at Cruz:

“First off, it was a great fight. I’m really proud of Marcello. It’s only two weeks we’ve been able to be part of these guys’ lives and implement what we can. But one thing you can’t teach with Marcello is his heart. Maybe Lawrence and Vick can teach Dominick how to finish a fight.”