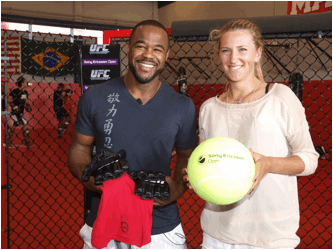 The footage of their experience can be viewed and downloaded here: http://video.ufc.tv/145/145-EVANS-VIKA-MEET-UP.mov

In a few weeks, the most bitter and long-running UFC feud since perhaps Chuck Liddell vs. Tito Ortiz II in 2006will come to a dramatic conclusion. In the main event of UFC 145, undefeated UFC Light Heavyweight Champion Jon “Bones” Jones collides with former friend turned bitter rival ‘Suga’ Rashad Evans.  UFC 145 goes down on April 21, live on Pay-Per-View from the Philips Arena in Atlanta, Georgia.

Evans and Azarenka had the following to say about their experience on Wednesday:

“This was a nice break from training. It lets your mind go free and gives you a chance to not think about the fight. It was cool that she’s another pro athlete, one who goes out there and competes, mano-a-mano. It was fun.”

“I can tell she’s genuinely interested in MMA – it was impressive how she grasps the concepts. I didn’tshow her too much except for kicking, but she knew a lot more than I thought she’d know. There were times she really looked like she knew what she was doing.”

“I love women’s tennis. It actually dominates men’s tennis in my opinion. You know they’re out there giving it everything they’ve got. They go through the same anxiety we do of not wanting to lose, and I respect that a lot.”

“I’d be alright in a tennis match because I’m pretty agile – I’m not too fast, but I’m very agile, so I mighthave a better chance at winning in a tennis match, but she might win in MMAbecause I don’t hit women.”

“It was a great experience to meet Rashad. He seems really nice – I’m sure he’s a little bit meaner in the cage, but he’s a great guy and it’s always great to meet somebody from a completely different field. I love to follow UFC. I invited him to tennis so I hope he can come cheer me on.”

“I wish I had time to train more. I’m curious about how these athletes train. I could pick up something interesting for myself.”