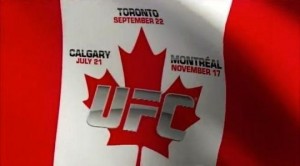 Canadian UFC fighters Nick Ring, Mitch Clarke and Jason MacDonald were also on hand, and Mark Hominick and Georges St-Pierre were beamed in via satellite.

White announced in 2012 the UFC will hold three fight cards in Canada during the calendar year. The first event will be UFC 149 in Calgary on July 21. The second will be UFC 152 in Toronto on September 22. And the third will be UFC 154 in Montreal on November 17.

If this news was not big enough already for Canadian mixed martial arts fans, the UFC plans a repeat performance next year and the year after with a commitment to hold three fight cards in Canada in 2013 and 2014 as well. The UFC also held three events in Canada in 2010 and 2011.

The headliner for UFC 149 in Calgary will be Jose Aldo, who will be defending his featherweight title against a to be determined opponent.

St-Pierre hopes to be healed up enough in time to fight on the November card in Montreal. Currently in rehab after ACL surgery, St-Pierre estimates he will be able to start training full out in July. If all goes well, GSP fans could see the UFC welterweight champ defend his title at UFC 154.

Stay close to ProMMAnow.com (www.prommanow.com) as more bouts are announced for UFC 149, UFC 152 and UFC 154 in the coming weeks and months, and refer to our Upcoming MMA Events page at any time for a quick update on any UFC card.

UPDATE: We originally reported there would be three UFC events in Canada in 2012, and three more in 2013. However, the UFC clarified with us there will be three events in 2014 as well. Even UFC.com failed to mention the 2014 dates.

Watch Wednesday’s UFC press conference from Calgary in its entirety in the player below.