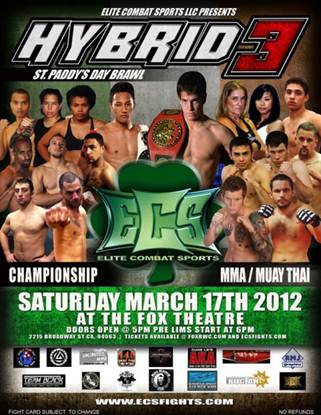 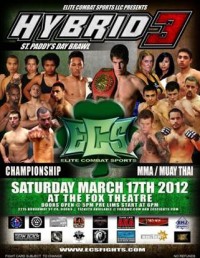 San Francisco, California (USA): It was a night of destiny as Elite Combat Sports all-amateur “Hybrid 3” fight card emanated live from the historic Fox Theatre in downtown Redwood City on Saturday, March 17th. St. Patrick’s Day was filled with beastly brawls, slick submissions, and electrifying action for those in attendance. Many young fighters distinguished themselves with performances that brought the fans to their feet.

“What a great night of action it was for all the Bay area fight fans in attendance!” exclaimed ECS Promoter Dave Madsen. “ECS took some big steps as a promotion, and I can’t wait for the next event.”

Here’s a rundown of the results:

– Scot Davenport vs. Vincent Bardi (exhibition): It was complete domination for Berdi, who had several slams and submission attempts.

– Javier Gomez vs. Adam Galiste ends in a split-draw: Great first round of action for both fighters. Gomez threw an extremely quick triangle choke in the first round, which ended with a good reversal/escape for Galiste. The bout featured great grappling from both sides, though Gomez seemed more experienced. It was a good matchup, but unfortunately, the bout ended in a controversial split-draw.

– JJ Okanovich defeated Ronnie McCoy via submission in the 1st round: This scrap featured good back and forth action, but Okanovich grabbed an armbar and the submission win early in the first round.

– Joshua San Diego defeated Michael De Jesus via split-decision: De Jesus was able to get close to a kimura submission in the first round, and went for a spinning back-fist in the second, but neither fighter was really able to establish a clear advantage. It was a close fight. San Diego won via split-decision after some initial confusion where the announcer proclaimed the fight for De Jesus.

– Charlie Seang defeated Jaime Rios via TKO in the 1st round: This was a quick fight. Seang landed some questionable shots that may have connected with the back of the head, but got a quick TKO victory after some ground and pound.

– Ashton Pierce defeated Marcello Dasalla via submission in the 1st roundPierce and Dasalla engaged in a firefight before Dasalla got a big slam takedown. Pierce persevered and slapped on a slick armbar sub.

– Robert Abbott defeated Brandon Umipig via majority decision: It was clearly a huge reach advantage for Abbott in this one, and he was almost able to get a triangle/straight armbar combo at the end of the first round. However, the bell sounded before he could cinch it. In the second, Abbott landed some kicks to the face from his back. It was awesome action! The
taller fighter landed more heavy strikes in the final round and almost got a rear-naked choke. Umipig was able to reverse and get top position at theend, but it was too little, too late. In the end, Abbott won via majority decision.

– Nikko Jackson defeated Keith Cutrone via submission in the 1st round for the CAMO West Coast Welterweight Championship: Nikko came out to the ring accompanied by his father, former UFC/Strikeforce fighter Eugene “The Wolf” Jackson. After surviving a big slam from Cutrone, Jackson was able to getan armbar and torque it. After fighting it, the referee ruled Cutrone submitted verbally.

– Radames Garcia defeated Ashton Crow via TKO in the 2nd round for the CAMO State Bantamweight Championship: UFC fighter and Bay Area legend Cung Le was in Garcia’s corner as the action got underway. There was lots of clinch work between the two in the first round. In the second, Garcia avoided an armbar with several spike slams that drew a big reaction from the crowd. Garcia followed up the last one with some hammer fists that elicited the TKO stoppage.

– John Cabrido defeated Cameron Daniels via TKO in the 2nd round: In what was unquestionably the weirdest fight of the night, Daniels didn’t seem to offer much against Cabrido, who was able to put together some good combos. Daniels made a bit of a comeback in the second round, but wasn’t able to do much damage. In the end, his choice of lunch came back to bite him, as he threw up in the ring, forcing the referee to stop the fight and award the TKO victory to Cabrido.

– Jimmy Machado vs. Phil Devera ended in a split-draw: Both fighters let it all hang out, absolutely throwing bombs throughout the fight! Despite the resulting exhaustion, it was great fight action. In the end, neither fight had his hand raised, as it was ruled a split-draw.

– Alexander Naumaski defeated Drvaughn Underwood via TKO in the 3rd round: Naumaski featured great leg-kicks in the first round, and was able to get a knockdown via elbows from the clinch. He got another knockdown in the second round. Underwood almost quit on the stool before the third round started, but headed back out there. Exhaustion was surely a factor in the end, as Naumaski got the TKO victory via head-kick, but Underwood had to take oxygen before leaving the ring.

– Gaston Bolanos defeated Daniel Recinos via KO in the 3rd round: It was a great first round for Bolanos, who fought Brad McDonald at a WCSC show at Kezar a couple years ago. It was a dominant second round for Bolanos, too, and more of the same in the third. In the end, Bolanos landed a devastating elbow and knocked Recinos out cold.

– TJ Archangel defeated Tyler Cronin via TKO before the start of the 4thround: In what many felt should have been the Muay Thai main event, Archangel put on a striking display that had the crowd oohing and aahing. Utilizing some flashy strikes, he had Cronin on his heels almost from the outset. He showed his toughness, but Cronin came up short, and the towel was thrown in before the start of the fourth round.