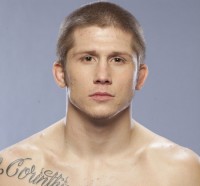 Lawrence commented on being chosen as the number one pick for Team Cruz. “Being chosen first, in a way, kind of made me feel confident but then again, I kind of felt a target being placed on my back,” he said. “It’s definitely more pressure. A lot of people expect a lot more from me now. All I can do is go in there and fight. I’ve been fighting since I was six-years-old.”

Lawrence has a tough fight ahead of him with the much more experienced Marcello. As a 4th degree BJJ black belt with nine of his 12 wins coming by way of submission, Marcello’s bread and butter is on the ground.

Lawrence spoke about how he is approaching the fight. “He’s a very good grappler so I really want to try and stay on my feet and make him feel uncomfortable as much as possible,” said Lawrence. “I don’t want this to turn into a Jiu Jitsu match cause I know that’s his strength. Dom’s crew (Team Cruz) has been doing a phenomenal job in training and preparing me and I’m pumped. I just have to fight my fight.”

On this season of The Ultimate Fighter, with the new live format, the contestants will be spending twice as long in the house as the fighters did on previous seasons. Lawrence commented on life inside the TUF house, now two weeks in.

“Life hasn’t been too bad (chuckle),” he said. “I miss the girls and I miss the radio! Other than that it hasn’t been that bad, better than I expected. I’m sure this week may get a little rough towards the end of the week, when I’m trying to sleep and the rest of the guys are staying up late and hanging out. We’ll see how it goes. It’s all part of it.”

The Ultimate Fighter Live on FX continues this Friday, March 23, at 10 p.m. ET/PT.