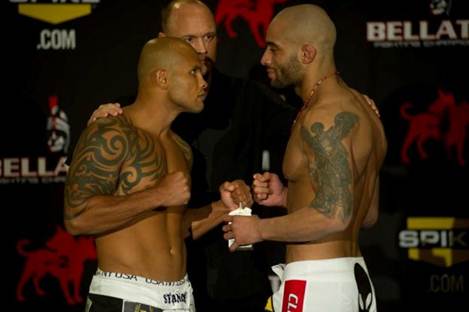 This weekend, Bellator 61 was supposed to finally name the next man to challenge heavyweight champion Cole Konrad. Instead Eric Prindle pulled out of his rematch with Thiago Silva and delayed the rematch once again. Now, the card will be headlined by eight men hoping to earn a shot at the Bellator middleweight title. The field includes a few Bellator retreads, a UFC veteran and a former M-1 champion.

Of course, if you are not into reading, you can get a little taste of Mann Talk in podcast form. The MMA Outsider Podcast hosted by InterMatFight.com broke down Bellator 61 with special guest TD Lott of CageJunkies.com.

Maiquel Falcao vs. Norman Paraisy
One-time UFC veteran Falcao returns to the big show against a veteran of the very first Bellator middleweight tournament. Despite not really showing it in his lone UFC appearance, Falcao hits with a ton of power and is not the easiest guy to takedown. Paraisy will be desperate to get this fight to the floor to avoid power shots. Falcao is a big favorite for a reason, but he has also showed that he can let fights slip away against even the lowest levels of competition. With that being said Falcao should be able to pick up a stoppage victory here.

Vitor Vianna vs. Brian Rogers
Vianna and Rogers both return for a second ride in a Bellator tournament after falling to eventual champion Alexander Shlemenko last season. Vianna is slick on the ground, while Rogers like to grind it out on the feet and against the cage. Vianna has shown a penchant for standing up in fights when he should not. On top of that, he might not have the game to ground Rogers. Looks for Rogers to stay out of trouble and control the pace of the fight en route to a decision victory.

Vyacheslav Vasilevsky vs. Victor O’Donnell
Vasilevsky has already won a big legal battle against former employer M-1 Global. After Bellator announcing their signing of the Russian prospect, M-1 announced that he was still under contract. Now that the dust has settled, he will fight. Unlike most Eastern European fighters, Vasilevsky seems rather confident on the ground. He does his best work on the feet. O’Donnell is sort of a “Jack of all trades, but master of none” kind of guy. He looks solid against lower level competition, but struggles when he steps up a level. Vasilevski is still unproven. A win over O’Donnell will go a long way in proving that the hype around “The Crushin Russian” is real, but it is not a forgone conclusion. However, the smart money is still on him.

Giva Santana vs. Bruno Santos
Santana is sort of a “Fight Finder Celebrity.” If you look up his record, it is immediately striking that he has won 13 fights via armbar submission. This, of course, has earned him the nickname “The Arm Collector.” Normally, he survives and rolls around on the ground before catching his trademark submission. Santos has not faced the highest levels of competition, but he has rolled with some solid grapplers. Expect him to avoid some submissions and do enough to take a decision victory in a small upset.