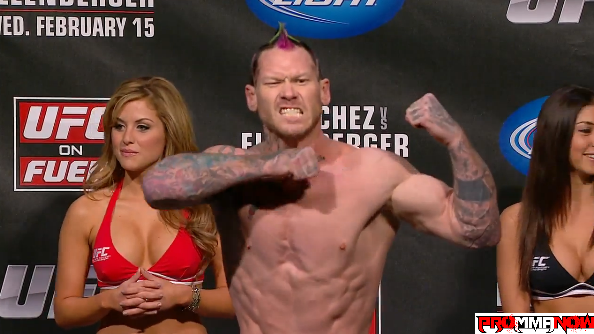 San Jose, CA (USA): It was announced today that UFC middleweight fighter Sean “The Destroyer” Loeffler has reached an agreement with Crossfire Media Group (CMG) to be represented in media matters by Phil Lanides, CMG Owner/Publicist.

CMG will provide PR and media relations services for Loeffler, and in the process help continue to build his brand. CMG will now handle all media requests for “The Destroyer.”

“I’m excited to work with a fighter the caliber of Sean,” stated Lanides. “He is colorful and quote-worthy, but most importantly, he brings it inside the Octagon. Once he heals up, he’s going to be a force to be reckoned with in the UFC.”

“I definitely understand how important it is to get your name out there and become recognizable, and I know that CMG is already helping me do that,” said Loeffler. “I expect that me working with Phil is going to help me get positioned to become the biggest I can possibly be.”

Ironically, one of the most buzzed about fighters in the UFC right now is one that hasn’t event made his Octagon debut. “The Destroyer” was scheduled to make his UFC debut at “UFC on Fuel 1: Ellenberger vs. Sanchez” on February 15th against Buddy Roberts. Unfortunately, Loeffler suffered an ankle injury while warming up and had to be pulled from the fight. This past week, he underwent successful ankle surgery, and hopes to be back in the cage in about six months.

With a record of 25-5 with 24 finishes, Loeffler has cultivated a reputation as one of the most excited fighters in the 185-pound division. He has won twelve of his last thirteen fights, finishing every one of his victims. Now on the mend, “The Destroyer” is also garnering a lot of attention for his entertaining interviews, complete with hilarious stories of his amazing life. In short, he is the complete package.