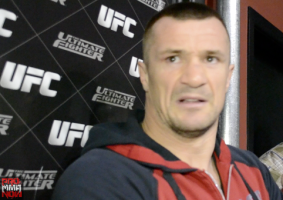 The fight couldn’t have played out any better for Cro Cop, who ended up winning a unanimous decision. Only a knockout victory would have been sweeter. Whether or not it really will be Cro Cop’s final fight remains to be seen. His days as a top level MMA fighter are over, but in a straight kickboxing match he could still put on some exciting fights.

Broadcast commentators of the event reported Cro Cop had made the statement in his dressing room prior to the fight that over the years he has had to take a lot of time out from fighting due to injuries, but if he can avoid further injuries and surgeries he would like to continue to fight.

There is some question about Cro Cop’s overall health. During his post-fight address to the crowd Saturday night his arm was visibly twitching. There was a recent Youtube video posted as well, shot after his TKO loss to Roy Nelson at UFC 137 last year, where Cro Cop could be seen twitching while watching the fights on a television backstage.

Now 37-years-old, between MMA and kickboxing, the Croatian has had a total of 64 professional fights. During that time he’s suffered a total of nine knockouts. That doesn’t sound like much, but some of them have been very brutal. And between Sept. 2010 and Oct. 2011, less than a year’s time, he suffered three straight knockouts inside the Octagon.

Can he still fight, can he still sell tickets and put on a show? Of course, but at what cost? And it’s not just the knockouts, one has to consider the repeated blows taken to the head during sparring and fights that may not have caused an actual KO, but can still cause damage over time.

Following the announcement of Cro Cop’s unanimous decision victory, Sefo picked him up and carried him around the ring, showing his respect and in effect celebrating the Croatian’s long and illustrious career. Then after Cro Cop addressed his fans in his native language, Sefo spoke in English, and shared his thoughts about his opponent to the crowd at Zagreb Arena:

“As for Mirko, I don’t even know why this guy wants to retire. Because after his performance tonight, he should keep fighting. I want everybody to understand that Mirko Cro Cop is the number one fighter to ever have come out of Croatia. Not only is he a living legend in kickboxing and K-1, he’s a living legend in MMA. So you guys are very lucky to have such a great hero like him, and he’s very lucky to have great people like you guys.”