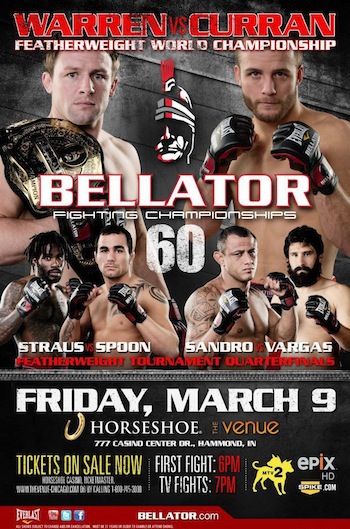 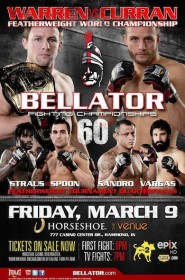 CHICAGO, Ill. (March 9, 2012) — Pat Curran and Joe Warren promised fireworks in their main event Featherweight Title Fight, but it was Curran who stopped the former Champion Warren in one of the most entertaining Bellator bouts seen in recent memory. The quarterfinals of the Bellator Season Six Featherweight Tournament are in the books as well as four tournament participants punched their tickets to the semifinal round. “Popo” Bezerra, Marlon Sandro, Mike Corey, and Daniel Straus all picked up victories at The Venue at the Horseshoe Casino in Hammond, Indiana LIVE on MTV2 and in HD on EPIX.

“What a night here at The Venue here in Hammond,” said Bellator Chairman & CEO Bjorn Rebney. “With a sellout crowd in Bellator’s backyard, Pat Curran cemented his name as one of the best featherweights on the planet and is our new Bellator Featherweight Champion.”

The last time the Bellator Featherweight Championship changed hands, it was Joe Warren stopping Joe Soto at Bellator 27. Pat Curran, the Bellator Summer Series Featherweight Tournament Champion, was looking to capitalize on his second tournament championship with a victory in the main event at Bellator 60. The first round opened up at a feverous pace, with both featherweights exchanging blows. After hurting Warren with an onslaught of punches and knees, Curran pursued “The Baddest Man on the Planet” looking for the finish. Warren, however, showed why he is the defending Bellator Featherweight Champion, as he found a way to avoid being finished. In the second round, it was Warren who controlled the fight with his Greco Roman wrestling for a majority of the round and seemed to be building some momentum in his favor. When the third round started, Pat Curran came out energized. After landing a knee to the chin of Warren, Curran followed up with a barrage of strikes that forced the referee to stop the fight.

With the victory, Pat Curran becomes the new Bellator Featherweight Champion as he stops Joe Warren with strikes and improves his record to 17-4 while the former Bellator Champion Warren drops to 7-3 and 5-2 under the Bellator banner.

In the opening round of the featherweight quarterfinals, Bellator veteran Daniel Straus was hoping his second run at a featherweight tournament championship would end with his hand raised in victory. Undefeated Bellator tournament newcomer Jeremy Spoon was looking to keep his perfect record intact while spoiling the return of Straus. It was a closely contested fight through the first two rounds, with Straus controlling the striking and Spoon controlling the clinch. In the third round, Spoon appeared to be the more aggressive fighter, but Straus again landed the more significant strikes. When the judges rendered their decision, it was Daniel Straus that walked away with the unanimous decision victory.

With the win, Daniel Straus improves his record to 18-4 and advances to the second round of the Bellator Season Six Featherweight Tournament. Jeremy Spoon loses for the very first time in his professional MMA career as his record falls to 12-1 with an outstanding effort.

When Bellator Featherweight Tournament Fighter Wagnney Fabiano injured himself in training, Ronnie Mann was left without an opponent. Illinois native Mike Corey saw an opportunity to face one of the best featherweights on the planet, and decided to step in on short notice. The first round saw plenty of action as both Mann and Corey landed shots that dropped their opponent. Corey was able to finish the round on top with some ground and pound. In the second round, Corey was able to secure a takedown and spent the majority of the time in a dominant position despite submission attempts from Mann. The third round looked similar to the second. Corey was able to get Mann to the canvas and deliver relentless ground and pound until the final bell sounded.

When the scorecards were read, Mike Corey walked away with a well-deserved unanimous decision victory and will move on to the semifinals of the Bellator Season Six Featherweight Tournament. He improves his record to 12-2 while Ronnie Mann drops to 21-4 as a professional.

Bellator Featherweight Tournament favorite Marlon Sandro was looking to make a statement in his second stint in a Bellator Tournament. Tournament newcomer Roberto Vargas was looking to score the biggest win of his career. The fight started off as an exciting back-and-forth affair that saw both fighters land clean shots. However, Sandro was able to overwhelm the less experienced Vargas with strikes that dropped him. After some ground and pound, Sandro was able to get the hooks in and submit Vargas with a rear naked choke at 3:35 of the first round.

Marlon Sandro improves his record to 21-3 and 4-1 under the Bellator banner. Roberto Vargas loses for just the second time in his professional MMA career.

In the first quarterfinal fight of the Bellator Season Six Featherweight Tournament, Alexandre “Popo” Bezerra came in as a favorite over late replacement, Kenny Foster. From the opening bell, “Popo” showed exactly why. Utilizing an array of head kicks and leg kicks was able to dominate Foster in the first round. In the second round, Foster came out with better footwork and appeared have learned from his striking mistakes in the first round, however Foster attempted a takedown that was stuffed from “Popo.” Bezerra was then able to get Foster’s back and slip in a rear naked choke that forced Foster to tap.

“Popo” improves his record to 13-1 and moves on to the semifinal round of the Bellator Season Six Featherweight Tournament. Foster, who drops his fourth straight fight, falls to 9-6 in his professional career.