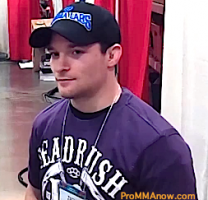 Makovsky informed us he will be defending his title against Eduardo Dantas (13-2) at Bellator 65 on April 13 at the Boardwalk Hall in Atlantic City, N.J. It will be his first title defense since winning the belt in Oct. 2010.

Makovsky is undefeated in his Bellator career, having won six straight fights. He won the Bellator 145-pound title with a unanimous decision victory over Ed West (17-6) in the season three Bantamweight Tournament Finals at Bellator 32.

Since then, Makovsky has fought twice, defeating Chad Robichaux (11-2) via TKO at Bellator 41 last April, then he submitted Ryan Roberts (16-10) at Bellator 54 last October. Both fights were non-title bouts. Fans can follow Zach Makovsky on Twitter at @ZachFunSize.

Be sure to check out all of Pro MMA Now’s exclusive 2012 Arnold Sports Festival coverage and stay close to the site for much more still to come.