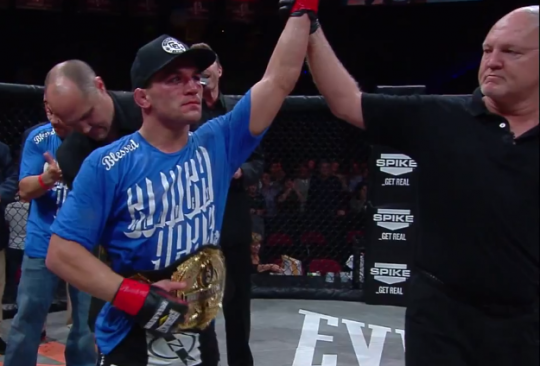 CHICAGO, Ill. (March 7, 2012) — On the heels of his title-winning fight of the year performance against the world’s top lightweight Eddie Alvarez, Bellator Lightweight Champion Michael Chandler returns to face one of his greatest tests to date as the Las Vegas-trained fighter takes on former UFC lightweight Akihiro Gono LIVE on Friday, May 4 at Bellator 67 in the always electric Casino Rama in Ontario, Canada.

Tickets for this event are on sale now and are available at Ticketmaster.com and in-person at the Casino Rama Box Office. Tickets are priced from $25-$175 Canadian.

After Chandler’s amazing fourth-round submission victory against then champion Eddie Alvarez at Bellator 58, the undefeated champion knows that he’s the one now with the target on his back.

“I’m just excited to get back into the cage,” Chandler said. “I fought four times in 2011 and I’m ready to get back to work. Gono has beaten some of the best fighters in the sport and this should be a good test for me.”

Edmonton native and Canadian fan favorite Ryan “The Real Deal” Ford will make his Bellator debut against 12-year MMA veteran Luis “Sapo” Santos, who enters the fight with an incredible 50-7 professional record. The two welterweights will square off in non-tournament action, and should provide fireworks.

The event will also be broadcast LIVE starting at 8 p.m. EST on MTV2 and in commercial-free HD on EPIX. Doors open at 6 p.m. EST, with the first fight scheduled for 7 p.m. EST. The preliminary card, featuring the area’s top local talent will be streamed LIVE and FREE around the world on Spike.com starting at 7 p.m. EST.

“Casino Rama has been a spectacular home to Bellator over the last year, so bringing our Lightweight Champion and the man who provided 2011’s Fight of the Year to Rama was an easy decision to make”.  Bellator Chairman & CEO Bjorn Rebney said. “As always our fight card will be stacked from top to bottom with many of the world’s best fighters, so I expect nothing less than a packed house once again on May 4.”

Bellator 67 will mark the third-time ever the organization has hosted an event at Casino Rama and the fourth time the promotion has visited Canada for an event.

“Bellator’s world-class fighting series provides Ontario fans with exactly the edge-of-your-set excitement Casino Rama is already known for, “ said Jeff Craik, Vice-President of Marketing, Casino Rama. “Being able to have Canadian fighters make their debuts before a home crowd is one more reason fans are going to want to be in their seats to see this event live in May!”