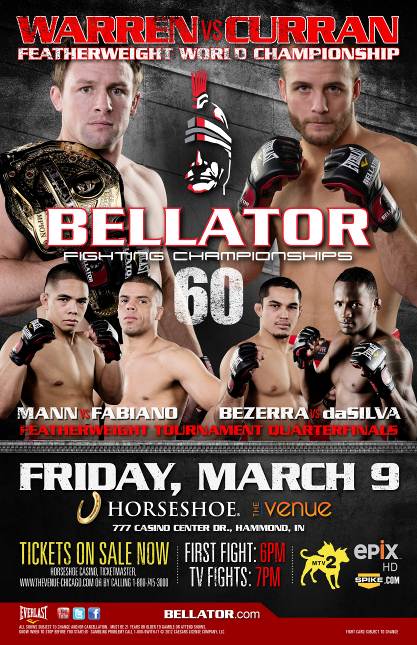 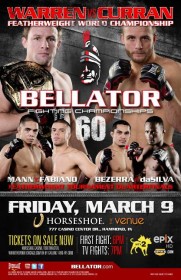 CHICAGO, Ill. (March 5, 2012) — As Bellator prepares to start its explosive sixth season, the fight card for Bellator 60 has been finalized with a number of preliminary fights featuring explosive local talent sure to make the Chicagoland area proud. March 9 will also feature the return of Crystal Lake’s own Pat Curran (@PatCurranMMA) as he battles for the Bellator Featherweight Championship against reigning champion and “Baddest Man on the Planet” Joe Warren. The night will also feature the start of the Season 6 Featherweight Tournament, with top contenders Marlon Sandro, Ronnie Mann, Daniel Straus and Alexandre “Popo” Bezerra all in action. Tickets for Bellator 60 are on sale now and are available at The Horseshoe Casino, Ticketmaster, www.thevenue-chicago.com, or by calling 1-800-745-3000. Tickets are priced from $42-$107.

The event will broadcast starting at 7 p.m. CT on MTV2 and in commercial-free HD on EPIX. Doors open at 5:30 p.m. CT, with the first fight scheduled for 6 p.m. CT. The preliminary card will be streamed LIVE and FREE around the world on Spike.com starting at 6 p.m. CT.

“The Midwest is packed with some incredible fighters and great fans,” Bellator Chairman & CEO Bjorn Rebney said. “To be hosting an event of this magnitude in our own backyard and having a chance to showcase the area’s top talent will be an great experience. Plus, you get to see Chicagoland’s own rising superstar Pat Curran vie for the World Title against one of the toughest fighters in all of MMA – Joe Warren. As a diehard MMA fan, I can’t wait for March 9th to get here at Horseshoe.”

Chicago native and former UFC veteran Shamar Bailey will make his Bellator debut when he battles Hobart’s Josh Shockley in a catchweight affair at 165 lbs. Shockley is coming off an impressive first-round submission victory at Bellator 57, and will be looking to keep the momentum going against the Indianapolis firefighter.

With over 75 professional fights to his credit, long-time MMA veteran Travis Wiuff will look to use his aggressive striking and knowledge to knock off promising light heavyweight prospect Anthony Gomez. A star pupil of UFC bantamweight Miguel Torres, Gomez looks to keep his positive momentum going with a big win over the seasoned Wiuff.

The always vocal Sean “Big Sexy” McCorkle will also make his Bellator debut as the 6-foot-7 Indianapolis fighter takes on Richard White in a super heavyweight fight. Bourbanais-based Bobby Reardanz is looking to collect a big win against Bellator veteran and New York native Kenny “The Tooth Fairy” Foster in a featherweight affair.

Indiana natives clash as Lance Surma takes on Eric Oria of Hammond. Both fresh to the MMA scene, the two local favorites will be looking to impressive the Bellator brass.

Team Curran member and Crystal Lake resident Cory Galloway is eyeing victory as he takes on Jake Nauracy, who will be fighting in front of his home town crowd of Hammond in this bantamweight affair and LIVE on Spike.com.