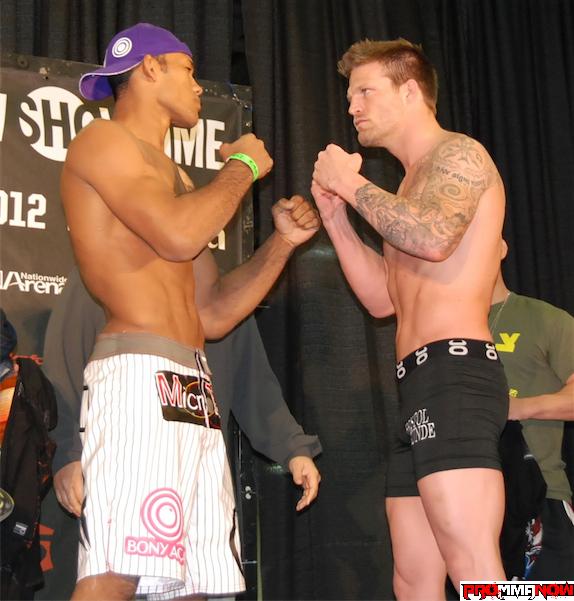 Ronaldo “Jacare” Souza showed off his world-class submission skills, submitting Bristol Marunde in the third round with an arm triangle choke to kick off the main televised card of the “Strikeforce: Tate vs. Rousey” event.

Souza established his right hand early, coming forward and scoring to start the bout against Marunde. Marunde was able to use his footwork to avoid any major damage early, and continued to switch stances as the round wore on. Souza finally setup a takedown with a nice right hand, and wasted little time taking the back of Marunde. The former middleweight champion stayed patient while on the back, peppering Marunde with punches under the arm from the top, but the action was stopped after the referee spotted a couple of strikes that landed to the back of the head. After a warning and a restart, “Jacare” dropped Marunde with a stiff right hand, and followed up with a guillotine attempt. Marunde managed to scramble out of trouble, but again gave up another late takedown near the end of the round.

Marunde landed his best punch of the fight to kick off the second round, scoring with a stinging left hand to the jaw of Souza. Souza came right back with a big right hand, followed by a kick that staggered Marunde. Souza closed the distance, put Marunde on the cage and again dragged him to the canvas. Souza was able to advance quickly to the back of Marunde, but was unable to keep the fight on the mat. “Jacare” reset and put together several punch-kick combinations to take control of the second round. A late takedown by Souza closed out another dominating round for the former champion.

A quick takedown in the final round proved to mark the beginning of the end for Marunde. Marunde was able to get back to his feet after the first takedown, but was unable to fend off the relentless ground attack of Souza. “Jacare” capitalized after taking the back of Marunde, locking up a arm triangle as his opponent tried to roll out of trouble.

The tap came quickly, giving Souza the submission victory and improving his overall record to 15-3 (5-1 SF).