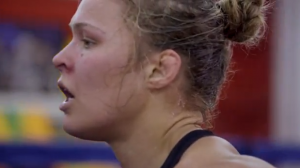 Not that most of you need a reminder, but “Rowdy” Ronda Rousey returns to action this Saturday night, March 3, when she takes on Strikeforce women’s bantamweight champion Miesha Tate in the “Strikeforce: Tate vs. Rousey” main event at Nationwide Arena in Columbus, Ohio, LIVE on Showtime. Check out this video of Ronda working out and training at Glendale Fighting Club with Coach Edmond Tarverdyan as she prepares for the most important fight of her career. The sports books have Ronda as the favorite at -300 with Miesha at +240. Do you agree?