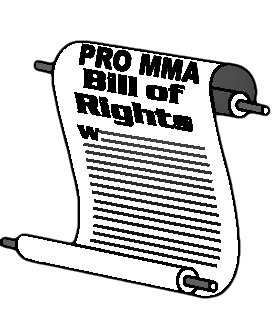 LAS VEGAS — The Culinary Union, who has been the primary antagonist to getting MMA legalized in New York has taken yet another shot at Zuffa and the UFC.

Today, a representative for Culinary Workers Union, Local 226 went before the Nevada State Athletic Commission (NSAC) in Las Vegas and gave testimony outlining what they call exploitative business practices within the sport. They called on the commission to adopt a “Bill of Rights for Professional Mixed-Martial Artists” comparable to the protection pro boxers currently receive under the Professional Boxers Bill of Rights and the Muhammad Ali Boxing Reform Act.

“Many athletes who compete in the sport of mixed-martial arts are subject to coercive contracts and exploitative business practices that are not allowed in professional boxing. We call on the Nevada Athletic Commission to take a leadership role and push for the adoption of this ‘Bill of Rights’ in every state where it is currently legal to hold mixed-martial arts events. If adopted and enforced, these ten rights would change the sport’s most egregious business practices.”

During his testimony before the NSAC today, Serres said they spoke with more than 50 professional MMA fighters and their agents and many of them feel exploited and undervalued, and in general, struggle against the following abuses:

a) Long-term, exclusivity contracts that bind an athlete to a single promoter, in some cases indefinitely.  Some contracts contain “automatic renewal” provisions or a “champion’s clause,” which automatically extends the contract of a fighter who becomes a champion.4 Such clauses make it more difficult for athletes to negotiate higher pay and diminish the incentive of smaller promoters to bid for talented fighters.

b) Limited control over image and likeness rights. Some contracts with promoters require an athlete to relinquish rights to his own image and likeness in perpetuity, or forever. The fighter must agree to forfeit future revenue streams from DVD sales, video games, clothing and other merchandising, even after retirement.

c) Lack of financial transparency. Under the Ali Act, promoters are required to make extensive financial disclosures to state athletic commissions, including copies of all written agreements with boxers participating in a match. No such requirements govern MMA under federal law or Nevada law. As a result, MMA fighters often have to negotiate in the dark and are unsure if they are being compensated fairly.

A complete copy of Serres’ testimony before the NSAC as well as the Culinary Union’s proposed “Bill of Rights for Professional Mixed-Martial Artists” is available here.