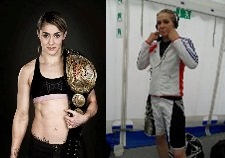 In the co-main event, two 29-year-old submission specialists – Jessica Penne (8-1) of Laguna Hills, Calif. and Lisa Ellis-Ward (14-7) of Lacey, Wash.- will square off with one another at strawweight (105 pounds).

Strikeforce bantamweight (135 pounds) stars Liz “Girl-Rilla” Carmouche (5-2) of San Diego, Calif. and Sarah D’Alelio (4-2) of San Jose, Calif. have also been enlisted for action. Carmouche, a United States Marine who did three tours of duty in The Middle East, will square off with unbeaten prospect Ashleigh Curry (1-0) of Kansas City, Mo. while D’Alelio will face Shana “Rock Solid” Nelson (5-2) of Hibbing, Minn.

“The time has come for a platform dedicated exclusively to building the growing women’s division in our great sport,” said Invicta Fighting Championships Vice President Knapp, who has held positions with the UFC, the IFL and, most recently Strikeforce, where she served as head of fighter relations and a core member of the promotion’s matchmaking team, until shortly after Strikeforce was acquired by the parent company of its top competitor, the UFC. “Invicta is committed to increasing the depth of the women’s field and building female superstars by providing women athletes with the opportunity to compete and hone their skills on a consistent basis throughout the year.

“I am honored to headline Invicta’s first fight card and I am looking forward to earning another win over Romy,” said the 5-foot-9, 30-year-old Coenen, a former champion in Strikeforce’s 135 pound division and the premiere female competitor out of Holland’s famed Team Golden Glory. Coenen submitted Ruyssen with a rear-naked choke in the second round of their first meeting in Basel, Switzerland on Aug. 2, 2008.

Ruyssen is a slick and dangerous 22-year-old grappler who has claimed all five of her career victories by way of submission in the first round of battle. Four of the five wins came via armbar.

“My first fight with Marloes is the only loss of my career so far, and I intend to avenge that loss on April 28” said Ruyssen. “Marloes is a great fighter, but she doesn’t quite have the ground game that I have. I am going to take her down and finish her.”

Penne, regarded as one of the most promising, up and coming female talents in MMA, was unbeaten through her first seven professional starts before losing a unanimous decision to Zoila Gurgel on Aug. 19, 2010. In her last effort on Nov. 19, 2010, she bounced back, submitting Amy Davis with a rear-naked choke in the first round of their matchup.

Ellis-Ward will look to return to the win column after two straight losses at the hands of Megumi Fujii and Jessica Aguilar, respectively. Prior to the slide, Ellis-Ward had reeled off two consecutive wins – a first round submission (rear-naked choke) of Stephanie Frausto and a unanimous decision over Aisling Daly.

In other main card action, Leslie Smith (3-2) of Pleasant Hill, Calif. will face off with Kaitlin Young (7-5) of St. Louis Park, Minn. at bantamweight and Sally Krumdiack (9-4) of Bellingham, Wash. will duke it out with Sarah Schneider (5-5) of Kansas City, Mo. at flyweight (115 pounds).

The 28-year-old Carmouche jumpstarted her career with five straight wins, only one of which went to the judges’ scorecards. She is looking to return to her winning ways after suffering back-to-back losses at the hands of Coenen and another superstar in Sarah Kaufman.

After scoring a first round TKO (punches) on Jessy Forman in her professional debut on June 12, 2010, the 26-year-old Curry will return to the cage for the first time. Curry has been touted for her western boxing skills.

D’Alelio, a 31-year-old, 5-foot-7 grappler, was victorious in her first four career fights – three by submission and one by TKO – but is looking for her first win since losing back-to-back fights against Julie Kedzie and undefeated rising star and Olympic Judo medalist Ronda Rousey.

The 31-year-old, 5-foot-7 Nelson, a hard-hitting striker who competes out of Minnesota Fight Factory, reeled off wins in her first four professional bouts and is coming off a first round TKO (punches) of Lina Eklund on Feb. 18.

All bouts have been approved by the Kansas State Athletic Commission.