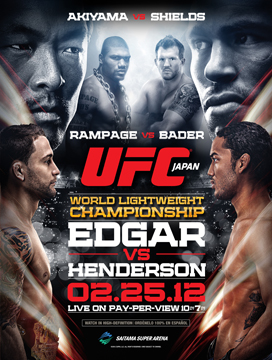 The UFC is set to return to Japan on Sunday(it’ll air on Saturday in North America) with the UFC 144: Edgar vs. Henderson event that will take place at the Saitama Super Arena in Saitama, Japan. It’ll mark the first time the UFC has held a show in the Land of the Rising Sun since December 2000.

It’s a quality card although it doesn’t cater to the average Japanese MMA fan that prefers freak show fights, but there are some native fighters vs. foreign fighter matches that appeal somewhat. This event is intriguing on many levels outside of the fighters fighting, so let’s take a look at five huge questions going into this event:

It’s interesting to look at Zuffa philosophies when trying to open up a new market. However, I’m not exactly sold on them wanting to ‘open up’ the Japanese market just yet. If you think of all the new markets that Zuffa has gone to in the last two to three years, they often return quickly if the initial venture is successful. Zuffa has gone to Brazil and Australia in the last two years while returning to those countries for another show within a year of the initial show. I’ve heard conflicting reports on the number of tickets sold for this Japan event, but I would have to think it’ll do around 10,000 fans. That number would be significantly lower than attendance numbers in PRIDE’s heyday. The Japanese state of MMA is pretty dead at the moment, so that number wouldn’t be bad considering that Zuffa is a foreign company. I don’t think Zuffa will be back to Japan for a while after this show, but it’s certainly something to keep an eye on. If they can get a TV deal similar to what they have in Brazil, then I’d probably change my tune a bit.

The Japanese fans are notorious for being quiet and respectful while being highly knowledgeable about MMA. This show will take place early in the morning around 10 a.m., so it’ll be interesting to see what that will be like. I’m a diehard MMA fan, but I can’t imagine that I’d be too excited to get up that early to go to an event. Most of the American fighters on the card are used to high energy crowds that either boo or cheer for their favorite fighters, so it’ll be interesting to see if this crowd will be any different.. Also, what effect will a subdued crowd have on the PPV broadcast? There’s nothing worse than a crowd that will boo at the drop of a dime, but I can’t imagine watching a UFC event with a silent crowd. What will it sound like when Bruce Buffer gets to the main event introduction, he’s beyond hyped, and the crowd quiet?

This Henderson vs. Edgar bout is a tough fight to call. There are a few ways that this fight could go and it’s amazing that Ben Henderson has improved this much in such a short period of time. I know some people have Gilbert Melendez as the number one guy(which I highly disagree with), but I think Edgar is clearly the number one guy based on his resume and level of competition faced. Henderson has beaten some tough guys as well, but he hasn’t beaten any top fighters except Jim Miller who Edgar has also beaten. So if Henderson is able to finish Frankie Edgar, would you consider him the number one lightweight in the world? If he wins a unanimous decision that’s pretty clear cut, would you consider him as number one?

I know some of you are reading this right now and saying what is this guy smoking right now, but there’s a method to the madness most of the time. Jackson hasn’t had an impressive performance in my book since his 2008 KO win over Wanderlei Silva. He didn’t look great against Keith Jardine or Matt Hamill, but I tried to give him a pass because admittedly it was probably pretty hard to get up for both of those fights under the circumstances. I tried to give Jackson a pass on the Evans fight because he had been away from MMA for such a long time making a movie, but he just does not seem like the same fighter that fought Chuck Liddell, Dan Henderson, Forrest Griffin, and Wanderlei Silva. He got finished by Jon Jones in his last fight, and already has a loss to Rashad Evans. A loss to Bader would pretty much kill interest in rematches with Evans or even a rematch from PRIDE with Shogun Rua. It’s clear that Jackson hates training, he’ll be 34 years old this year, and for someone that’s supposed to have KO power he hasn’t knocked anybody out since 2008. What say you?