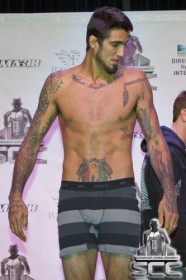 ProMMAnow.com was cage side for the event and provided LIVE play-by-play text commentary here on the site, and will have a complete photo gallery from all the fights posted later today.

Despite losing a second round submission in the SCC 4 main event, the night’s big money-maker was UFC veteran and winner of The Ultimate Fighter season 3, Kendall Grove, who took home $10,000. Grove’s opponent, Jay Silva, earned $9,000 for his win, becoming only the second person to ever submit the veteran.

Although the scheduled middleweight bout between Terry Martin and Jesse Taylor was cancelled due to Martin failing to gain medical clearance, Taylor still received his show and win money for a total of $5,000. Martin was not paid.

The complete SCC 4 fighter payments are as follows:

Disclaimer – The above salary figures do not represent money fighters may earn through sponsorships, possible performance bonuses some promotions pay out or otherwise. Also not represented are expenses fighters may have to pay out for licenses, taxes, etc.