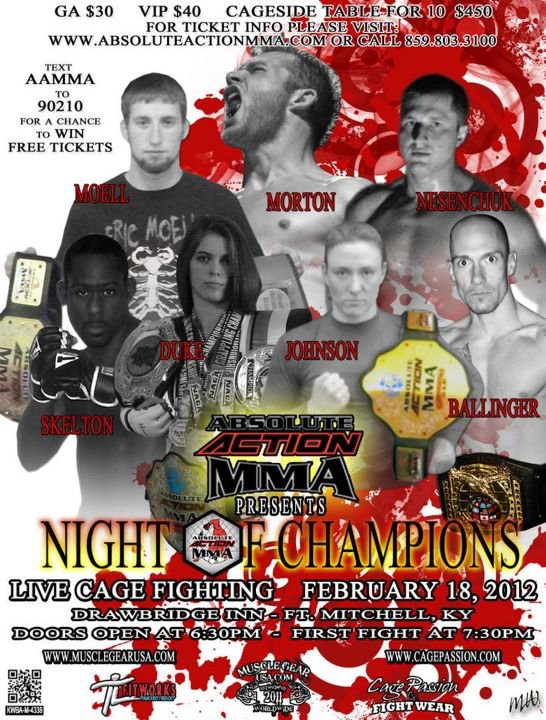 Absolute Action MMA makes its return to The Drawbridge Inn located in Ft. Mitchell, Ky. this Saturday, Feb. 18, for their 23rd event. Five amateur title fights are scheduled as well as three former amateur title holders being showcased as professionals.

AAMMA is reporting that all tickets have been sold but arrangements are being made to add additional seating.

The reason for the hype surrounding this event is clearly the high level of talent that laces the fight card. Women’s flyweight champion Evva Johnson defends her title against King of the Cage veteran Heather Bassett in a highly anticipated fight.

Son of Siam fighter and current welterweight champion James Fehring will put his belt on the line against a very aggressive fighter in Michael West. Team Jorge Gurgel member James Morton vacated his amateur title to enter the realm of being a professional and will take on another former AAMMA amateur title holder in Doug Ballinger.

And in a similar scenario Eric Moell vacated his bantamweight championship to turn pro and will face a very experienced Christopher Sallie who is making his debut as well.

All in all 15 fights are scheduled at the moment pending clearance of the Kentucky Boxing and Wrestling Authority. For more information visit www.absoluteactionmma.com.

Here is the fight card as it currently stands: