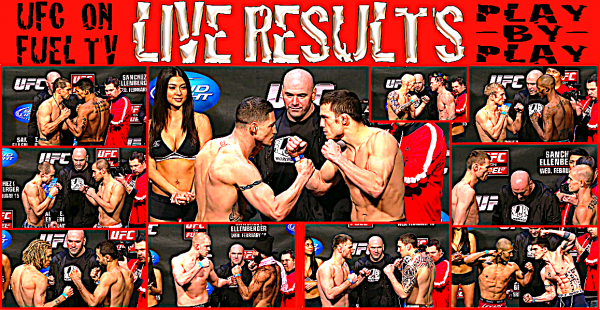 Press F5 on keyboard to refresh the page as results are updated in real time following each round of action.

Round 2 – No touch of gloves. Salas with a right hand, backs him up with a one two three. Leg kick, counter right from Kuivanen. Salas ducks a right, shoots, presses Kuivanen to cage. He backs out after a brief clinch. Salas shoots, stuffed. Overhand right misses from Salas. Misses a left to the body and misses a front kick. Kuivanen with a Superman type punch misses. Nice straight left from Salas. Double jab from Salas scores. Right to the chest from Kuivanen. Salas shoots for a single, stuffed, pushes Kuivanen to the cage, lands a knee. Clinch, sweeps Kuivanen to the ground but he pops right up. Salas slips to the ground but is back up. Leg kick from Salas. Right hand from Salas scores. Kuivanen’s nose leaking. Salas shoots, pushes Kuivanen to the cage, stopped. Exits with a nice right to the side of the head. PMN scores it 10-9 Salas.

Round 3 – Touch gloves. Nice left kick to the body from Salas. Salas shoots, puts Kuivanen on his back. Salas postures up and lands a couple nice punches. Kuivanen goes for a heel hook. Salas spins out, lays on top in half guard. Stands up with a couple big rights that miss due to Kuivanen defending with his legs. Big left from Salas scores though as he dives in. Kuivanen gets to his knees and feet and his nose is busted up. Right hand from Kuivanen scores, inside leg kick scores. Salas shoots, pushes Kuivanen to the cage. Short elbow from Salas, he backs out. For some reason commentators Kenny Florian and Jon Anik keep saying this fight is close. I don’t see that at all. Salas is winning both rounds and this round convincingly in my opinion. Big body slam from Salas. Hovers with a big right that scores and a knee to the body as Kuivanen gets to his feet. PMN scores it 10-9 and 30-27 for Salas.

Round 1 – Bad news. Sean Loeffler and Buddy Roberts’ UFC debut will have to wait. Loeffler, a 30-fight veteran suffered an ankle injury sometime earlier this evening while warming up. I spoke to Sean on Monday and this was a huge moment in his career. It’s been a long time coming and for this to happen has to be incredibly heartbreaking. You can read that interview here. See photo of Loeffler’s ankle.

Round 1 – Albert part of Dennis Hallman’s “Cowboy Karate” camp. Leg kick from Albert. Overhand right from Menjivar. Front kick. Body kick from Albert. Lands a one two, knee, throws a high kick, blocked. Underhooks and lands a couple knees. Menjivar checks a leg kick. Menjivar gets a body lock and puts Albert down on his back, now inside his full guard. Albert throws up his legs, transitions to an omoplata. Menjivar counters and lands some nice hammerfists. Albert goes for an armbar and switches to a heel hook as Menjivar goes for his own leg lock. They scramble, body kick from Menjivar as Albert gets to his feet. Albert fires back and hurts Menjivar with a knee, he almost finishes Menjivar. It could have been stopped. But Menjivar survives. Albert ends up jumping into a guillotine attempt but Menjivar slips out now ends up on top with the advantage. Albert gives up his back and Menjivar chokes him out. Fight of the Night so far and one of the best of the year so far!! Awesome comeback by Menjivar who came very close to getting finished. A tactical mistake by Albert going for and losing that guillotine cost him the fight.

Round 1 – Superman punch followed by a single leg takedown attempt from TJ. Walel hops around in defense. TJ finally picks him up for the slam but like a rubber ball Watson bounces up. Watson bounces back up and gets slammed again. Sounds like a pro wrestling canvas slam. Walel with long wiry legs. Nice right hand on the jaw by TJ. Walel scrambles to his feet and TJ takes his back with both hooks in, lands some nice punches to the side of the head and locks on a rear naked choke but looks to be on top of the chin. Lets it go.  Nice solid elbow from TJ as Walel leaves himself wide open. TJ gets his back again, this time the arm is under the chin, Walel rolls and now TJ is full mounted on Walel. Elbow from TJ with 1:30 to go. TJ locks on another choke but can’t get his arm under the chin. Walel in pure defense mode. Thirty seconds to go. Back to full mount as Walel rolls, now gives up his back again and looks like he will survive the round. He keeps saying “I’m good” to the ref and he survives. PMN scores round 1 10-8 for TJ Dillashaw.

Round 2 – Nice big right by TJ. Walel tells him to come on, misses a kick. Another right by TJ and he takes Watson down. Walel throws his legs up already looking for something. TJ puts a knee in his ribs from side mount and now in half guard. Elbow and punches from TJ. Another elbow, another elbow, elbow to the body, to the face with this measured and controlled attack. TJ posutres up. Watson gives up his back, rolls and now is fully mounted. TJ rains down punches and elbows. Watson just covering up now, gives up his back again. Elbows and punches continue to rain down. This fight could have been stopped and would have by many refs already. TJ going for another choke but no dice as Watson prevents it but TJ goes back to a methodical domination and embarrassing beatdown as Watson flails. TJ rains down more punches with 25 seconds left. Big big shots from Dillashaw, a complete beatdown. PMN scores the round 10-7 for Dillashaw.

Round 3 – I can’t recall the last 10-7 I gave, but basically it means the fight should have been stopped. Touch gloves. Jumping kick from Watson misses. Leg kick from TJ. Right hand from TJ. Wheel kick misses from Watson. TJ shoots. Watson goes for a guillotine but  TJ gets out and moves to side mount. Watson makes it back to his feet. He looks okay which is crazy surprising. I still feel it could and probably should have been stopped last round but this is a very experienced ref and he can obviously see the fight better than anyone. Watson jumps into a flying triangle. TJ in a bad position for just a second but he escapes. Watson goes for a leg, transitions to a heel hook, then a calf slicer and TJ is out of danger with just over a minute to go. TJ inside full guard. Watson gives up his back. TJ puts one arm under the chin but Watson doesn’t allow him to lock on the second hand. TJ gets full mount and rains down huge elbows as time runs out. Watson gets up quickly and both guys throw their arms up and down in effect telling the crowd to cheer. PMN scores the round 10-9 and the fight  30-25.

Round 1 – De Fries rocks Miocic with a couple nice punches. Miocic fires back and hurts De Fries. He goes down and Miocic finishes him off. Started with a right counter on the chin that sent De Fries into retreat, he went down covered up and then got put out with a final sequence. Both guys were undefeated coming in but Miocic’s chin withstood the initial shots and he was able to come back.

Round 1 – Jim Axtell is the ref. Touch of gloves. Markes’s debut at middleweight. He tags Simpson with a couple punches and shoots. Simpson stops it and his back is go the cage. Markes with a body lock, over under. They wrestle for position. Ref separates them to the center. Simpson listens to his corner and moves laterally, misses a big overhand right. Leg kick from Markes, again. Simpson misses one. Markes looks much bigger. Simpson gets countered with a couple punches. Couple nice leg kicks from Markes. Nice lunging jab from Simpson. He drops Markes with an uppercut, inside full guard, lands a couple big elbows, postures up with a big right hand. Markes using legs to defend as Simpson stands over him. Kicks his thigh. Ref lets Markes up. A little wobbly. Anik says you could hear the uppercut land. Markes comes in throwing combinations. Simpson barely misses a big uppercut and ties Markes up against the cage. PMN scores it 10-9 Simpson.

Round 2 – Simpson didn’t sit down between rounds. Two big leg kicks from Markes. Simpson counters with a heavy right hand. Overhand right and body clinch from Simpson as he pushes Markes to the cage, knee to the thigh. They separate. Leg kick inside by Markes. Markes lands a nice elbow. Simpson pushes him to the cage, knee to the body. Markes pushes him off. High kick from Simpson, overhand right, neither land solid. Body lock takedown by Simpson, Markes pops right up, turns Simpson to the cage. Simpson turns Markes to the cage. Under two minutes to go. Markes turns him around, dancing the tango. Elbow from Markes, and uses the body lock to put Simpson on his back. Boos from the crowd as Markes not being very active. Markes in half guard, lands some body punches and elbows to the head. Simpson gets to this feet with 30 seconds left. Simpson trying to get out of the clinch but Markes controlling. PMN scores the round 10-9 for Markes.

Round 3 – Touch gloves. Body lock from Simpson as he ducks some punches, knee from Simpson to the body. Simpson backs out. Markes with a leg kick. Uppercut from Simpson. Markes lands his own uppercut. Simpson checks a leg kick. Markes ties him up, drives him to the cage. Ref separates them. This round could decide the fight. Left right to the body; punches look a bit labored. Markes with a leg kick. Body lock from Markes, pushes Simpson to the cage. Under two minutes. It’s a stale mate and the ref separates them. Both guys land nice right hands, Simpson shoots, has a body lock, backs out. Simpson lands a n overhand right hand but it was pretty wild and appears to slip to the ground. They scramble and Simpson gets up but Markes is controlling and time is up. PMN  scores the round 10-9 Markes and the fight 29-28 for Markes. It’s very close though and could be a draw or go either way. I wouldn’t argue with any of those.

Round 1 – Diego Sanchez just came out brandishing a cross in the air, exorcising the arena while saying something, quite possibly chanting, “The power of Christ compels you”. He seriously looked like he was chasing back the demons.  The crowd boos Diego… he is in enemy territory. The staredown is intense. Diego looks possessed. They come out swinging, Diego ducks a combo. Leg kick from Diego. Body kick from Ellenberger. Jake flashing a feeling jab. Diego with a one two. Diego swings and misses and Jake counters. Body kick from Jake. Diego looks a little flabby in the waist. Left to the body, right up high from Diego. Knee from Ellenberger catches Diego on the head just barely. Diego checks his head for blood. Diego lands a couple nice punches as he rushes in. Jab from Jake. Head kick from Jake blocked. This crowd is loud in Omaha. Diego comes in swinging. Jake locks him up, lands a couple knees. Ellenberger counters Diego’s combo and drops him with a one two. Diego is back up presses forward with more punches and lands a high kick that cuts Sanchez and possibly broke his nose. PMN scores round 1 for Ellenberger 10-9.

Diego said he severely sprained his ankle a couple weeks out from the fight.