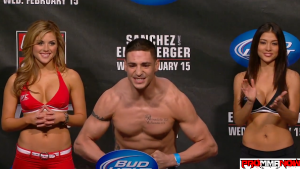 On Wednesday, Feb. 15, Spike TV is hosting a UFC marathon featuring, among others, the fights of perennial welterweight contender Diego Sanchez.

It is no accident of course Sanchez is headlining the UFC’s first live event on Fuel TV Wednesday night in Omaha, Neb., as he takes on top five ranked welterweight Jake Ellenberger.

Starting at 7 p.m. ET (4 p.m. PT) Spike TV will begin airing some of Sanchez’s best fights, including his “fight of the night” performance from last October when he defeated Paulo Thiago at UFC 121, his “fight of the year” performance against Clay Guida from the TUF 9 Finale, as well as his first round submission-due-to-punches win over David Bielkhden at UFC 82.

Although the Ultimate Fighting Championship has a new broadcast contract with FOX Sports Media Group, Spike TV still has the right to air taped UFC programming throughout 2012, and you can bet they will take advantage of every opportunity to counter-program they can. After all, that is how the television game is played.