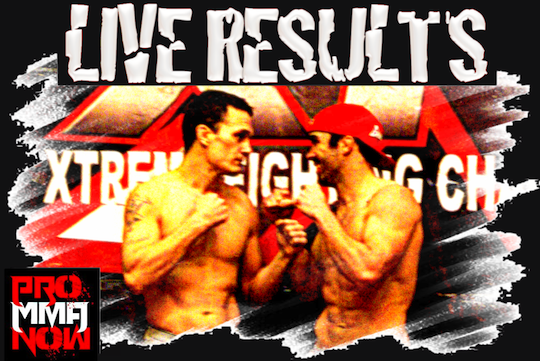 KNOXVILLE, Tenn. – ProMMAnow.com (www.prommanow.com) photographer Josh Cross is cage side tonight for “XFC 16: High Stakes” at the Knoxville Civic Auditorium. While Josh is snapping photos yours truly will be bringing you the live punch-by-punch, takedown-by-takedown commentary and fight results.

Former UFC standout Drew Fickett (41-16) will face off with former WEC lightweight champion Jamie Varner (18-6-1, 2 NC) in the night’s 160 pound catchweight main event. Fickett has dropped his last three fights in a row, all in the first round, and at this point in his career seems to be doing little more than showing up to collect a paycheck.

Varner on the other hand, went through a rough patch in 2010, but changed camps and seems to have taken the necessary steps to improve and get back on the winning track. He went 2-1 in 2011, most recently scoring a first round knockout over Nate Jolly at XFC 14 back in October.

Hale was part of the XFC’s first visit to Knoxville back in 2009 which was Tennessee’s first ever sanctioned pro MMA event. He is also a Strikeforce and Bellator veteran and is coming off a split decision win over Gerric Hayes back in January 2011 in Nashville. With more than a year since Hale’s last bout, ring rust could be a factor for the Virginia fighter.

The non-televised preliminary card kicks off at 7 p.m. ET (4 p.m. PT) and will be followed by the main card at 9 p.m. ET (6 p.m. PT) LIVE on HDNet. Check out our photos from the XFC 16 weigh-ins and be sure to check back after tonight’s show for our exclusive photos from the fights.

Here are the odds on select bouts:

Round 1 – Ed Clay in West’s corner. West looks like a damn bodybuilder. Touch gloves. Left hook from West does not connect. Hale shoots. West pushes him to the cage, Hale turns him around, knee to the thigh. West ducks an elbow, Hale misses a leg kick as they move to the center. West unleashes a flurry of fury with one of the most explosive and demonic finishing sequences I’ve ever seen. It started with a liver kick followed by a couple dozen punches, kicks and knees from the clinch. Hale goes down and West continues the assault until the ref pulls him off. Big win for the former Marine.

Round 1 – Nate Jolly is the ref. He was the main event at XFC 15. Right hand from Gallegos connects. Oselukwue goes airborne, throws a kick but gets dumped on his back. Gallegos inside full guard. Oselukwe using the cage to get up, lands a couple knees from the clinch. Gallegos goes to throw a left hook but gets clipped with what appears to be just a lazy right hand but it lands right on the chin and Gallegos goes down face first and he is out cold.

Round 1 – Sayles weighs 298 big pounds. Enormous dude. Touch gloves. Gormley misses a left hook. Lands a inside leg kick. Shoots, gets the takedown and lands on top in half guard. Full mount from Gormley, Sayles gives up his back, scramble and Gormley ends back up on top in half guard on the other side. Body shots from Gormley. Rests on top with more ground and pound, body and head shots and an elbow or two. Sayles trying to bench press him off. Gormley moves to side control. A few boos start. Sayles locks a triangle upside down but Gormley pops out easily. Sayles gets to his feet and they square up. Left hook from Sayles, body shot from Gormley. Jab from Sayles, jab from Gormley and an overhand right. Leg kick from Gormley. Jab from Sayles, Gormley slips it. Overhand right from Gormley scores. PMN scores it 10-9 Gormley.

Round 3 – Touch gloves. Gormley shoots, stuffed. Sayles lands a couple punches and a knee. Straight left from Sayles on the chin. He stuffs another Gormley shot. Gormley with a combo that doesn’t really land and with no power behind it. Sayles stuffs another shot. Gormley losing a lot of power. But gets a takedown. On top in half guard. Sayles going for an arm. Gormley pulls Sayles legs out as he tries to get up. Gormley on top in half guard, landing body shots and keeping Sayles flattened on his back, gets him away from the cage. Gormley postures up with some big shots. Sayles tries to explode out but Gormley control it. Gormley tries for an Americana, lets it go. Less than a minute to go. Couple of rights from Gormley as he postures up. It ends with Gormley still on top throwing punches. PMN scores the round 10-9 Gormley and the fight 29-28 for Gormley.

Round 2 – Cook circling, misses a body kick, Wright clinches him up with underhooks, presses him to the cage, lands a couple knees to the midsection and Wright puts him down. Cook goes for a heel hook, twists it up, Wright rolls and uses his free leg to push Cook off to the cheers of the crowd. Wright back inside full guard. Knoxville on fire for Mr. Wright. Nice right from Wright. Cook trying to throw his legs up looking for something. Wright pushes him to the cage. Two minutes to go in the second round. Wright postures up with a couple heavy hands. Couple more nice rights and an elbow from Wright. Coach Eric Turner right in front of Wright giving instruction. Body shots from Wright. Ref stands them up. Cook slips a left from Wright and time is up. PMN scores the round 10-9 for Wright. Shout out to Mr. Zonar in Wright’s corner.

Round 3 – Cook stays standing between rounds. Spinning kick from Cook misses. Lands a jab. Time is called after Wright takes an accidental low blow. Wright circles. Cook shoots, stuffed. Wright pushes him to the cage. Wright with underhooks, knees to the thighs from Wright. Cook pulls guard for some inexplicable reason. He hasn’t been able to do anything there for the last two rounds, so not sure what he’s thinking here. Wright postures up inside guard. Cook kicks him back and springs to his feet. Wright clinches up with underhooks, pushes Cook to the cage and starts landing knees. Cook tries for a trip unsuccessfully. Wright obviously the stronger fighter. Cook goes for a suplex but Wright lands right back on his feet never letting go the clinch. Knees from Cook to thighs. Wright turns Cook’s midsection red with body shots and knees, still clinched up. And that’s it… Wright does a victory lap even before the official decision. PMN scores the round 10-9 Wright and 30-27 Wright.

Wright improves to 6-1-1. Keep an eye on this Knoxville Martial Arts fighter and teammate of Ovince Saint Preux.

Unfortunately they have stopped this fight due to Clark’s eye. It does look awful and she likely can’t see out of it at all.

Round 1 – Gomez takes the center, Samman with a combo. Gomez shoots pushes Samman to the cage. Gomez goes to his knees for a single, now double as Samman sprawls. Gomez pulls half guard. Samman lands a few punches and Gomez shoots in for a single while still on his knees. Body shots from Samman, more punches. Gomez almost with a fireman’s carry. Samman with some elbow strikes to the body and more punches. Gomez  goes for a leg as they scramble. Samman with body shots and takes Gomez’s back with hooks in and looking for the choke. Big punches from Samman to the face as Gomez turtles. Samman flattens him out and pounds with rights and lefts to the side of the head until Gomez, who is a BJJ black belt by the way, taps out.

Round 1 – Varner jumps in the air a la Tito Ortiz style. They face off and Varner doesn’t even look at him. Fickett has two stars on his shoulders just like Varner, obviously making fun of him. Inside leg kick from Fickett. Varner lands a left jab then drops Fickett with right hand behind it. Perfect one-two. Varner pounces with a huge flurry. Fickett taps out due to strikes. Varner hugs him and you can overhear Varner say, “I wouldn’t be here if it wasn’t for you. Sorry… I love you.”  He gives Fickett a lot of love after the fight in the post-fight interview.