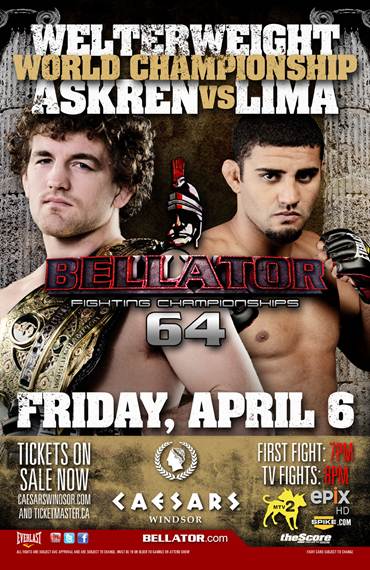 Bellator Fighting Championships confirmed the details of the match-up via press release on Wednesday. Bellator 64’s preliminary card will broadcast LIVE and free online at Spike.com starting at 7 p.m. ET and the main card will air LIVE on MTV2 starting at 8 p.m. ET.

Askren is coming off a split decision victory over season four 170 pound tournament winner Jay Hieron last October. Although Askren got the nod, Hieron’s well-rounded game made the fight a bit too close for comfort for the champ.

Already known for his impeccable wrestling, the Olympian said he went right back to work and feels good about the progress he has made in his stand-up over the last few months:

“After my fight with Jay, I went back to work the following Monday to continue my training. I made no secret I wasn’t happy with my performance in that fight, and now having spent over six months training at Roufusport, I’m really confident in my striking. Douglas is a great fighter, but I don’t think he’ll be able to handle what I bring to the table.”

Riding a nine-fight win streak, Lima comes into the bout having absolutely dominated Bellator’s 2011 season five tournament. Beginning with a unanimous decision win over Steve Carl in September, he moved on to knock out  Chris Lozano in October and UFC veteran Ben Saunders in November.

And before that, he started off 2011 by defending his Maximum Fighting Championship welterweight title with a first round knockout of UFC veteran Terry Martin at MFC 29 in April. Lima spoke about his shot at Askren:

“There is no question Ben is a great fighter, and I’ve been focusing a lot of time on my wrestling. This is the biggest fight of my career, and I’m preparing for it. It’s all I think about. Every day from the time I wake up, until the time my head hits the pillow, I’m thinking about April 6th and winning the title.”

There will be a Bellator 64 pre-fight press conference on Wednesday, Feb. 15, at Caesars Windsor. Bellator Chairman & CEO Bjorn Rebney, along with Askren, Lima and Horodecki, are expected to attend.