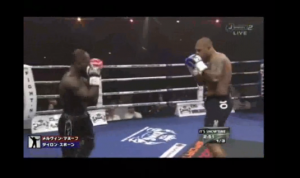 We already showed you the main event bout between Badr Hari and Gokhan Saki from Friday night’s It’s Showtime 55 at the WTC Expo in Leeuwarden, Netherlands. Now check out this strike-fest between Melvin Manhoef (37-10, 27 KO’s) and Tyrone Spong (67-6-1, 1 NC, 42 KO’s) from the same event. If anyone had told you before this fight that it was going the distance, would you have believed them? Me neither.

In desperate need of a win, Manhoef came into this fight having lost his last two kickboxing bouts (to Gokhan Saki in 2010 and to Remy Bonjasky in 2009). Not to mention he is on a three-fight skid in MMA as well. At 35-years-old the Mike’s Gym veteran may be feeling the effects of his age. Spong on the other hand, continues to impress. He fought twice at It’s Showtime in 2011, winning one by knockout, one by decision. Spong has been spending time with Rashad Evans and the Blackzilian crew down in Florida and is scheduled to return to action in May against Peter Aerts.