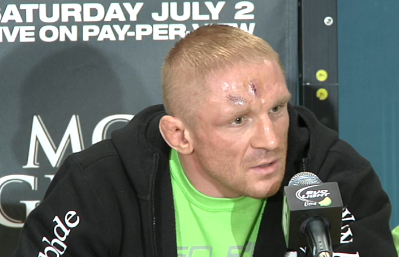 The UFC has added two more bouts to the UFC on FUEL TV 2 card that will be headlined by Alexander Gustafsson and Antonio Rogerio Nogueira in Sweden on April 14th. A featherweight bout between Dennis Siver and Diego Nunes was announced by the UFC website. Also, a featherweight bout between TUF 14’s Akira Corassani and Jason Young was announced for the event. This event is set for April 14th in Stockholm, Sweden, at the Ericsson Globe Arena.

Diego Nunes (17-2) is coming off a unanimous decision win over Manvel Gamburyan at UFC 141 last month. Nunes has won four out of his last five fights with the lone loss coming against highly regarded Kenny Florian in a very competitive matchup at UFC 131. Nunes is regarded as a top ten featherweight by most pundits and is (2-1) in his UFC career.

Dennis Siver (19-8) is coming off a submission loss to Donald Cerrone back at UFC 137. The kickboxer had won four bouts in a row prior to that loss and looks to get back in the saddle against a quality opponent. This will be Siver’s featherweight debut after fighting exclusively as a lightweight during his UFC tenure.

Akira Corassani (9-3, 1NC) will make his UFC debut after competing on the last season of The Ultimate Fighter where he made it to the semi-finals before being eliminated. Corassani did not compete on the TUF 14 Finale show and hasn’t officially competed since losing to Paul Reed via TKO in February 2011.

Jason Young (8-5) is coming into this fight after losing both of his UFC fights via unanimous decision, so he’s definitely in need of a win here against Corassani. Young has fought primarily in England and is the former Cage Rage lightweight champion.

The tentative UFC on FUEL TV 2 card is below: