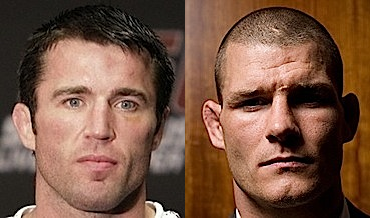 This is your lucky day. Why? Because most people are going to have to wait until this Saturday to watch top UFC middleweight contenders Chael Sonnen and Michael Bisping square off.

But because you are smart enough to remember ProMMAnow.com (www.prommanow.com) always has interviews with the biggest names in mixed martial arts every Thursday when we post the exclusive archives of 102.5 FM The Game’s (Nashville Sports Radio) MMA radio show, you get to witness Sonnen and Bisping square off two days early! Congratulations. You should pat yourself on the back… or you could hug yourself, or even kiss yourself if you’re feeling extra frisky.

The significance of the top 185-pound contenders competing in the co-main event live on prime time Fox television was not lost on the ever humble and always reserved Sonnen:

“This is a big match coming up this weekend, and not just ours, it’s a triple-header. We’re the true main event, we’re the ones that sold the tickets. We’re the ones that are bringing the people in. But the fact of the matter is there is a lot of other good talent on this card. And Chael Sonnen Promotions in conjunction with Zuffa will bring you UFC on Fox 2 live Saturday night from the United Center, 8 in the East 5 in the West — in case you failed to hear me the first time.”

Quite surprising to a lot of people is just how respectful both Sonnen and Bisping have been toward one another coming into this fight. It has not been as tame as the Sonnen-Stann match-up, but still fairly respectful for the most part.

When asked if he agreed with statements from his camp that Bisping has a tendency to “break easily” in fights, Sonnen was not compliant:

“Well look, I’ve got a job to do and all that good stuff. But I’m not going to talk crazy. The facts are the facts. I’ve been a fan of his for awhile and I’ve never seen him break. I didn’t see him break in the Dan Henderson fight. And had the roles been reversed and I got hit with that shot by Dan Henderson, the same thing would have happened to me. If I was to pay him a compliment, speaking sincerely, I would say his toughness is his greatest attribute. I would say the fact that he goes hard the whole time and doesn’t back down is his strongest point. I read that same interview, I know that came from my camp and when I saw that I thought, well I’m not sure what tape you’re watching.”

Listen to the entire interview with both fighters below.

Sports fans can listen to 102.5 FM online 24/7 or tune in every Thursday morning for LIVE MMA talk at www.1025thegame.com. ProMMAnow.com (www.prommanow.com) is the exclusive home of the 1st Quarter’s MMA archives.