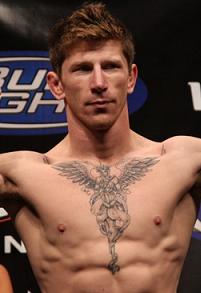 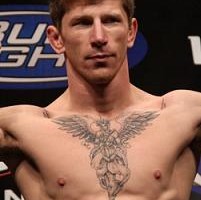 Lewiston, ME (January 24, 2012) – New England Fights! And Nick DiSalvo Promotions are proud to announce that former Featherweight World Champion and current UFC fighter Mike Thomas Brown (@mikebrownmma) will be in attendance as the Honored Guest at Fight Night I on February 11th at the Androscoggin Bank Colisee in Lewiston, Maine and will be holding a special seminar the night before weigh-ins.
“I am so proud that Maine’s favorite fighting son, Mike Brown, will be our honored guest at Fight Night,” stated DiSalvo. “Mike Brown is one of the best featherweight fighters in the world and held the universally-recognized title in the 145-pound division for over a year. He is a World Champion and a world-class athlete, and we’re proud that Fight Night I will be the first time he’s ever attended a mixed martial arts event in his home state.”
Additionally, Brown has announced that he will be holding a special seminar the night before weigh-ins on Thursday, February 9th at Central Maine Brazilian Jiu-Jitsu (CMBJJ) in Auburn, Maine from 6:30-8:30 PM. During the two hours, Brown will be sharing the secrets and reviewing the techniques that enabled him to acquire a 25-8 career record. Cost of the seminar is $55, but attendees that purchase a ticket to Fight Night at the seminar will be given a $5.00 discount off the seminar price. Prices for Fight Night begin as low as $25.00 for reserved seating.
Mike Brown (25-8) wrestled at Bonny Eagle High School in Standish, Maine where he won a state championship in 1992. After high school, Brown went on to wrestle at Norwich University where he excelled as a scholar-athlete.
After graduating from college, Brown moved back to Maine and began training and competing in mixed martial arts (MMA) as an original member of the first true New England fight team, Team Elite. After establishing himself as a top prospect in the regional circuit, Brown moved to Coconut Creek, Florida to accept an invitation to become a member of one of the most famed MMA schools of all-time, American Top Team.
On November 5th, 2008, Mike Brown captured the World Extreme Cagefighting (WEC) Featherweight Title. With the win, Brown became the number one ranked 145-pound fighter in the world. He defended the title twice and held onto the belt for over a year. In late 2010, the WEC was absorbed into the Ultimate Fighting Championship (UFC) where Mike Brown continues to experience success as a world-class featherweight fighter, most recently defeating Nam Phan at UFC 133 in Philadelphia, PA.
In addition to competing, coaching and managing fighters, Brown has also been a staunch advocate for the sport at the policymaking level. In 2009, Mike testified in front of the Maine Legislature and made the case for the legalization and regulation of the sport in the state. Brown’s efforts were well received and the Legislature passed the bill. As a thank you for his efforts, the Legislature and Governor invited Mike back to the State House when the bill was signed into law.
“Mike Brown is MMA royalty in Maine,” stated Fight Night matchmaker Matt Peterson. “Mike created a world championship career through dedication, hard work, and sacrifice. He represents the best about MMA and it will be a true honor to have him in attendance on February 11th. Fans will have the chance to meet him and learn firsthand why he has inspired countless people across the world to chase their dreams and make the most of every opportunity that life offers them.”
“I’m excited that MMA has finally arrived in Maine,” stated Brown. “A lot of people put in a lot of work to make this happen and it’s historic that we’ll be able to celebrate the achievement at Fight Night I on February 11th. I’m looking forward to enjoying some great match-ups on my home soil and checking out the next generation of Maine fighters.”
For more information and to register for the seminar call 207.776.8051, email newenglandfights@gmail.com or visit www.newenglandfights.com.