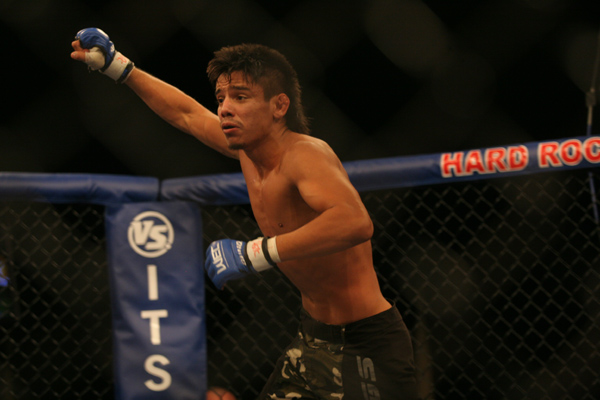 The UFC 145 event that was originally planned for Montreal, Canada, in March has been scrapped with those scheduled bouts being transferred to the Atlanta event that’s set for April 21st. Two new bouts have been announced by the UFC. Miguel Torres is set to take on Michael McDonald in a bantamweight bout, and TUF 14’s Marcus Brimage will take on Strikeforce transplant Maximo Blanco in a featherweight bout.

Miguel Torres (39-4) will return to action for the first time after being cut from the promotion for a explicit Twitter post. Torres was last seen in action back at UFC 139 winning a unanimous decision against Nick Pace. The former WEC bantamweight kingpin has won three of his last four bouts dating back to September 2010.

Michael McDonald (14-1) will return to action after dismantling Alex Soto via KO in his last outing which also took place back at UFC 139. McDonald is one of the fastest rising prospects at only 21 years of age and he’s currently riding a seven fight winning streak dating back to October 2009.

Marcus Brimage (4-1) will return to action after winning his official UFC debut against Stephan Bass at the TUF 14 Finale back in December. Brimage began his fight career in 2007, but has been sidelined with numerous injuries but hads loads of potential at only 26 years old.

Maximo Blanco (8-3-1, 1NC) was last seen in action getting his six fight win streak snapped by the always tough Pat Healy. Blanco had fought exclusively in Japan prior to his last fight which took place in the Strikeforce promotion. This will be Blanco’s UFC debut.

The tentative UFC 145 card can be found below:

Stay tuned to Pro MMA Now for news on the main and co-main fights for this event.