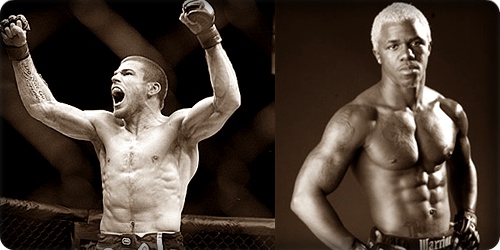 The UFC on FX main event features a lightweight bout between Melvin Guillard and Jim Miller with the winner looking to get back ‘in the mix’ for a title shot. It’s an interesting fight between two of the best lightweights in the world who are both coming off crushing losses  in their last bouts that ended long winning streaks for both respectively. It should be a very good main event, but let’s look deeper into this matchup to see who will come out on top.

Melvin Guillard comes into this fight with a career record of (29-9-2, 1NC) with 19 wins via TKO/KO and two submission wins to his credit. Guillard was last seen in action getting stunned with a stiff jab and then choked out by Joe Lauzon in what as a huge upset back at UFC 136 in October 2011. Guillard was riding a five fight winning streak going into that fight, finishing his opponents in three of those fights. Guillard is arguably the most athletic lightweight in the division with dynamite in his hands, good takedown defense, good hand speed, and great balance/agility. However, he always seems to check out mentally in at the biggest moments whether it’s shooting for a takedown against Nate Diaz after dominating him on the feet or getting rocked with a jab for a guy considered primarily a grappler in Joe Lauzon. He also have very suspect submission defense as eight of his nine losses have come via submission.

Jim Miller comes into this fight with a career record of  (20-3) with 11 wins via submission and three wins via TKO/KO. Miller was last seen in action getting dominated by Ben Henderson en route to losing a unanimous decision back in August 2011. Miller was riding a seven fight winning streak going into that fight, finishing his opponents in four of those fights. Miller is absolutely relentless, a good wrestler that’s well versed in submissions, but also competent on the feet. He’s a fighter that a fighter like Melvin Guillard should beat, but usually falls prey too because of the mental lapses in his game at times.

I probably agree with those odds, but I would have to put a small wager on Guillard just based on his ability in hopes that he fights the smart fight which is no guarantee. This fight is going to come down to two major things.

The thing with Guillard is that if he makes a mistake it’s usually in the first round as seven of his nine losses have come in the first round. If he makes it into the second round and beyond he normally does well. I’m not sure that he has fought someone with the skill set of Jim Miller though. Miller will press the action while closing the distance looking to take Guillard to the ground. Guillard has good takedown defense with a combination of great balance and agility so it will not be easy for Miller to accomplish, but all he needs to do is be successful on one of them. Guillard does not have a good track record once the fight goes to the ground as I’ve already indicated. Miller has good ground and pound and I can easily see him forcing Guillard to give up his back and then sinking in the rear naked choke. It should be noted that Guillard doesn’t play the jiu-jitsu game though. He looks to get right back up to this feet once taken down, so Miller will also have to be able to keep him on the ground. I’m not sure he’ll be able to do that for long periods of time.

Guillard simply needs to keep the fight on the feet and let his natural ability take over while remaining disciplined, basically meaning do the  simple things like keep his hands up and chin down. It should be noted that Miller has never been stopped in his career. All three of his losses have come via decision, and those losses are to Ben Henderson, Gray Maynard, and current champion Frankie Edgar. That’s not too shabby. So Guillard is going to have to beat on Miller for 15 minutes or become the first fighter to stop Miller via TKO/KO. He certainly has the power to do it when he’s on.

Guillard should win this fight in my opinion. It’s just really difficult to put trust in him against someone like Miller. I think Guillard is either going to win a decision by stuffing takedowns and out striking Miller for three rounds, or he could possibly knock him out. The other scenario is Miller being relentless and getting stuffed on takedowns, then finally getting a takedown and putting Guillard in a bad position to work a submission. Miller is the more consistent fighter and that’s who I’m going to go with in this fight. Miller via submission.