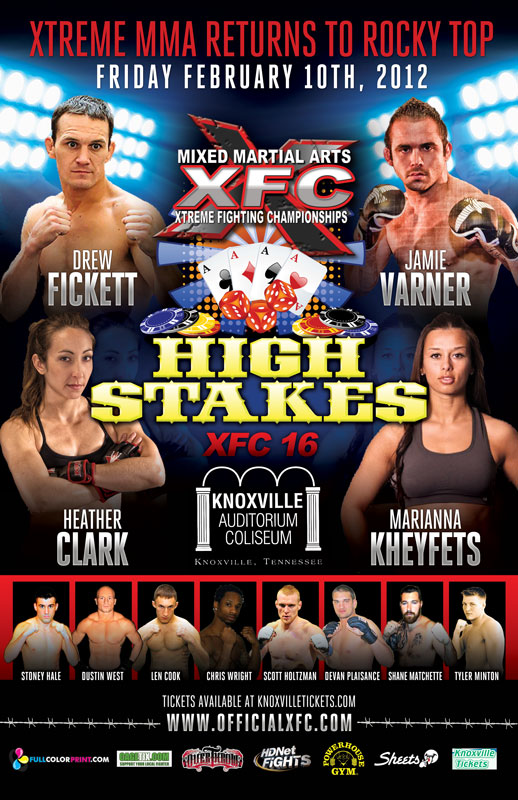 Two of Tennessee’s most popular fighters will collide in the Knoxville Civic Coliseum at XFC 16: ‘High Stakes’ when Stoney Hale steps into the XFC cage to take on Dustin West on Feb. 10th. The two men have a devoted following in the Volunteer state and both are looking to take the next step in their career live on HDNet.

Known for his heavy hands and gutsy performances in the cage Stoney Hale (4-2) has created a following in East Tennessee. With wins in Bellator and Strikeforce ‘The Skuller’ is the one promoters call anytime a big show comes to town. In his last outing Hale defeated Gerric Hayes at a Strikeforce Challengers show in Nashville, TN.

A computer software consultant by day, Hale is one of the nicest, most unassuming fighters in MMA. But once the cage door closes the Team Oxendine product is all business. “This is a big fight for me,” said Hale. “I’m really looking forward to my fight with Dustin and I think it has the potential to be the fight of the night. I’ve seen Dustin fight and I know he likes to bang. I don’t mind standing and the fans are going to get their money’s worth. I think I matchup well with Dustin and I have one word to describe this fight: fireworks. We both are heavy handed and like to bang. If it stays standing I think I will do well but if it goes to the ground I know I will be fine there too.”

Standing in Hale’s way is Dustin West. Arguably the most popular fighter in Middle Tennessee West (5-4) will take his KO road show to Knoxville on Feb. 10th to set up a Middleweight Volunteer State showdown. Known primarily for his knockout power, ‘DWest’ has two 9 second knockouts on his record. The first came for Strikeforce last January and the second came against MMA legend Johnathan Ivey last November. In over 100 professional MMA fights against men like Ken Shamrock and Dan Severn Ivey had never been knocked. Nine short seconds in the cage with West was all it took for Ivey to find himself looking up at the lights while West’s hands were raised.

West is a former Marine who quickly rose through the amateur ranks in Middle Tennessee on his way to an impressive 10-0 record. In his pro debut West walked through Ultimate Fighter veteran Blake Bowman in under two minutes. With some bad luck and injuries behind him West appears to be 100% and ready for Hale at ‘High Stakes’.

“Stoney Hale vs Dustin West could steal the show in Knoxville,” says XFC President John Prisco. “Dustin is known for very quick knockouts but Stoney knocked a guy out in 11 seconds in 2010. My advice to those watching on HDNet, don’t blink. Both men have had wins on some big shows recently and I’m excited to have both of them competing for the XFC. Dustin just knocked out Johnathan Ivey and Ivey is a guy who fights anyone and everyone and no one has knocked him out. And Dustin didn’t just knocked him out. He knocked him out cold. I’m really looking forward to this fight and I will be very surprised if this one goes the distance.”

In addition to Hale vs. West XFC 16 : “High Stakes” will feature Drew Fickett vs Jamie Varner in the main event and Nicolae Cury vs Corey Hill in the co-main event. The Featured Bout of the Evening will pit 2 of the XFC’s Female Fighters both hot off their win streaks; Heather Clark vs Marianna Kheyfets. Rounding out the HDnet Live card will be: Len Cook vs Chris Wright. Josh Samman vs Mikey Gomez, and Chase Gormley vs Brandon Sayles.

XFC 16 : High Stakes is sponsored by Sheets Energy Strips & Overthrow Gear and will air live on HDnet from the Knoxville Civic Coliseum in Knoxville, TN on February 10th, 2012. Tickets are on sale now through OfficialXFC.com. To learn more about the XFC, please visit www.officialxfc.com, “Like” them on Facebook, and “Follow” the promotion on Twitter (@officialxfc).