Breaking news: Chael Sonnen vs. Michael Bisping at UFC on FOX event, Munoz out with an injury 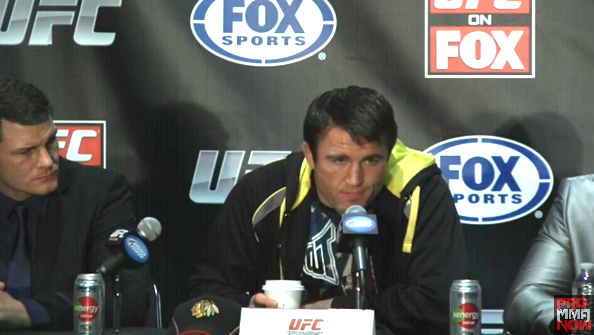 Munoz is injured and out of the FOX fight! Now it’s Chael Sonnen vs Mike Bisping jan 28th and the winner will fight Anderson for the title.

The fight will take place on January 28th in Chicago which is only a week and a half away. However, it’s a fight that should draw more interest in that Sonnen and Bisping have traded barbs about one another in the past. It’s a fight that should be entertaining as Bisping will look to keep the fight standing while Sonnen will look to put Bisping on his back and punish him via ground and pound. Also, it should be noted that Sonnen has shown weak submission defense in the past and Bisping’s jiu-jitsu is a bit underrated in my opinion.

There is no word on the injury that Mark Munoz sustained that has caused him to pull out of the fight, but one must speculate that it’s a significant injury to pass on such a huge fight on FOX. It’s unclear if Bisping’s original opponent Demian Maia will remain on the card at this time.

Stay tuned to Pro MMA Now for more as this story develops.

One thought on “Breaking news: Chael Sonnen vs. Michael Bisping at UFC on FOX event, Munoz out with an injury”