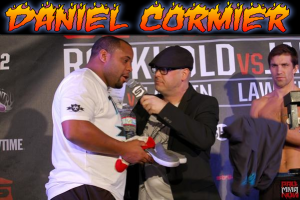 Cormier is recovering from a hand injury after breaking it in a first round knockout victory over Antonio “Bigfoot” Silva in the heavyweight tournament semifinals in September. The AKA wrestling coach discussed his recovery progress and admitted it’s going a little slower than he anticipated.

Cormier also shared his thoughts on Barnett and how he feels he matches up with the former UFC heavyweight champion. He talked about the differences in their wrestling styles and does not feel it is in Barnett’s best interest to try to out-wrestle him.

Cormier said it makes it easier going into the fight knowing that win or lose he will likely end up going to the UFC, but first and foremost he wants to win the tournament. The winner of the tournament is expected to fight one more time in Strikeforce and Cormier speculates on who that opponent could possibly be.