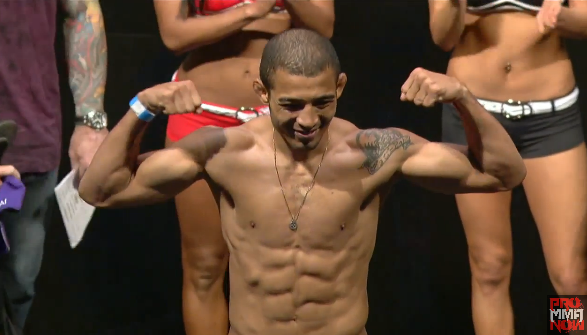 Jose Aldo successfully defended his title for the third time in spectacular fashion, knocking out Chad Mendes with just one tick left on the clock in the first round.

The champion never let the wrestling of Mendes get on track, sidestepping and stuffing each and every attempt at a takedown from the challenger. When Aldo wasn’t defending takedowns, he was landing crippling leg kicks that took the wind out of the sails of Mendes. Mendes was effective with leg kicks of his own, but his inability to get the takedown would prove to be his undoing.

Mendes finally managed to drive Aldo into the cage late in the round, delivering some effective knees to the thighs before elevating the champion and looking for a slam. A grab of the cage from Aldo kept the champion upright, resulting in a warning from the referee as the action continued. Aldo kept defending the relentless takedown attempts from Mendes, working on wrist control to break the grip of the challenger.

Aldo succeeded and as he pushed off and away to create space, anticipated the re-shoot of Mendes perfectly. Aldo leaned in as Mendes changed levels and fired off a vicious knee that caught the challenger square on the chin. Mendes dropped immediately and appeared to be out, but Aldo followed and planted a final right hand that left Mendes unconscious on the canvas.

The champ immediately ran out of the cage and into the crowd as it erupted into chaos. After returning to the cage, Aldo thanked his teammates and dedicated the fight to his mother on her birthday.