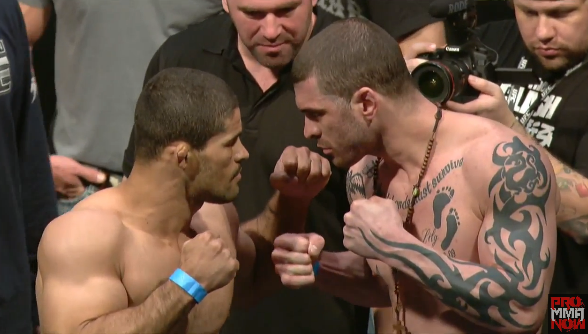 When Rousimar Palhares grabs a leg, he usually takes it home with him. That’s exactly what he did to Mike Massenzio, locking up a brutal heel hook that forced Massenzio to tap — both verbally and physically — at just over the first minute of round 1.

Palhares started the bout scoring with stinging leg kicks before landing one up the middle that stopped the action momentarily as Massenzio was given time to recover.

After the restart, Palhares quickly secured a takedown, but couldn’t keep the fight on the mat as Massenzio scrambled back to his feet. Palhares again looked to take the fight to the mat, this time pulling guard and dragging Massenzio to the mat. Palhares immediately grabbed a leg and locked up the heel hook before Massenzio could step out and away from trouble. Massenzio appeared to verbally submit before Palhares had fully started torquing on the submission, but it mattered little as the tap came within seconds at 1:03 of the first round.

The win marks the third straight victory for Palhares who improves to 7-2 in the UFC and 14-3 overall.