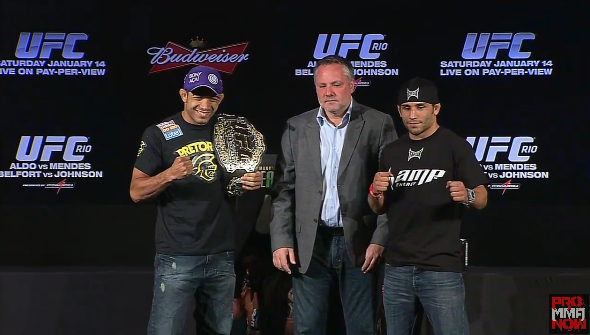 The UFC 142 card will be headlined by a title fight in which Brazil’s own Jose Aldo will defend his featherweight title against highly ranked Chad Mendes of Team Alpha Male. It will be Aldo’s fifth title defense since winning the title against Mike Brown(then the WEC title prior to the UFC/WEC merge) back at WEC 44 in 2009. A number of people think Mendes has the style that could pose serious problems for Aldo, so let’s get it and see who’ll come out victorious.

Chad Mendes comes into this bout with a career record of (11-0) with two wins via TKO/KO and two wins via submission. He was last seen in action defeating Rani Yahya via unanimous decision at UFC 133. Mendes comes from a  wrestling background, earning All-American honors while honing his skills with the likes of Urijah Faber and Joseph Benavidez. His striking is improving but it’s still a work in progress as well as his overall skill set. He does have very good cardio, but the knock on him is that he’s still fairly one dimensional at this point in his young career.

Jose Aldo comes into this bout with a career record of (20-1) with 12 wins via TKO/KO and two wins via submission. Aldo was last seen in action soundly defeating Kenny Florian via unanimous decision at UFC 136. Aldo is a complete fighter with devastating striking skills, great takedown defense, and well versed in submissions. He has already defeated Urijah Faber so that experience should serve him well in this fight. If there’s a hole in his game it’s his cardio although that was really only on one occasion. He has gone five rounds on three separate occasions.

Aldo is the favorite at (-250) and Mendes is the underdog at (+200). I would agree with those odds for the most part as Mendes will have to fight a very disciplined fight to win here.

This fight basically comes down to if Mendes has the wrestling ability to take Aldo down and control him before taking too much damage like his teammate Urijah Faber did when he faced Aldo a couple of years ago. Aldo has tremendous takedown defense, but Mendes is arguably the best wrestler that Aldo has faced up till this point. Mendes has very good wrestling, but let’s not pretend it’s ‘world class’ by any means. He has been successful on about 70% of his takedown attempts, but he has never faced anyone with the takedown defense of Aldo who has defended close to 95% of the takedown attempts against him.

Mendes loves the power double takedown it’s a great move for him, but there’s a couple of things he will have to do to be successful with it. He’ll have to strike enough to make Aldo respect him in that department, and he’ll need to gauge his distance so that he’s not shooting from too far away. If he doesn’t do both of those he won’t be successful at all, and he’ll wind up eating a knee coming in because he shot from too far out. I think the best strategy for Mendes is to put Aldo against the cage the way Kenny Florian did and hopefully make Aldo work which will allow Mendes to zap some of his explosiveness and he won’t be in the danger zone of Aldo’s powerful strikes. My only question is can he keep Aldo down once he gets the takedown?  If he’s able to do that it’s possible he could steal three rounds and possibly win a judges decision.

Aldo simply needs to keep this fight standing, avoid being taken down, and he needs to make Mendes pay each time he’s in striking range. Aldo’s strikes do major damage, just look at Faber’s leg after Aldo finished with him, or look at Mark Hominick’s face after a couple of rounds of eating punches from Aldo. If Aldo is able to inflict enough damage early on, he should be able to defend the takedowns and probably put Mendes away later in the fight. The one thing Aldo must be weary of is kicking too much as I’m sure that Mendes has practiced catching kicks and transtioning into takedowns from that position. Aldo has lightning fast kicks so it will be pretty difficult for Mendes to implement this strategy in my opinion.

Mendes has the style that could give Aldo problems, but he’ll have to fight virtually a perfect fight to win in my opinion. It’s very difficult to fight 25 minutes without making mistakes against someone the caliber of Aldo. It’s a benefit to Mendes that he trains with Faber who has already fought Aldo, but it’s also a benefit to Aldo in that Faber and Mendes are very similar fighters.

I think Aldo beats Mendes by either TKO or unanimous decision. I envision him outstriking him the entire fight while defending takedowns, or by landing a huge knee as Mendes shoots for a takedown and then finishing him afterwards.