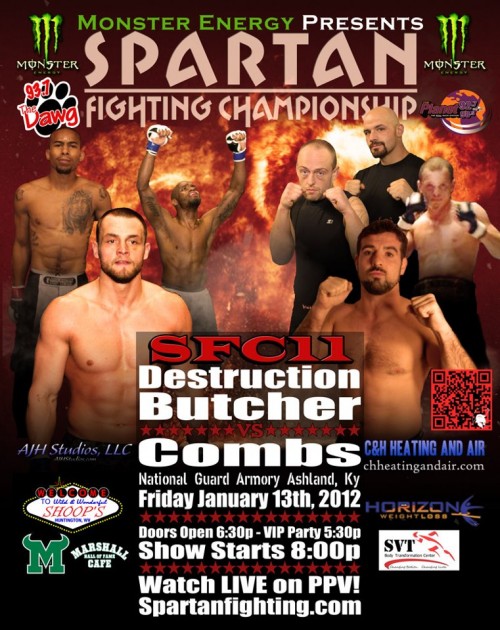 Spartan Fighting Championship returns to the National Guard Armory in Ashland, Ky., this evening with “SFC 11: Destruction“. The card is headlined with four professional bouts, including an SFC bantamweight title bout between ProMMAnow.com’s 2009 Amateur Fighter of the Year, Thomas Campbell (3-1) and undefeated West Virginia fighter, Cornelius Godfrey (3-0) in the co-main event.

In the main event undefeated Jason Butcher (2-0) of Ground Zero in Huntington, W.V., will look to stay unbeaten against possibly his toughest opponent to date. Jared “Honey” Combs (6-1) hasn’t lost since 2009 and is riding a five-fight win streak. Both fighters are looking to establish themselves as the top middleweight in the Ohio Valley Region.

“SFC 11: Destruction” will stream LIVE on our Live MMA Events page starting at 8 p.m. ET (5 p.m. PT) for a very low price of only $9.99. ProMMAnow.com‘s (www.prommanow.com) own Gary Thomas will be performing play-by-play commentating duties during the broadcast.  If you do not order the online pay-per-view, that is okay, ProMMAnow.com will provide LIVE results of tonight’s action as well as round by round commentary for the pro fights.

Round 1 – Nelson gets a takedown and full mount early in the round. Renfro tries to get up, they scramble but Nelson returns to full mount and locks on a keylock submission at 1:08.

Round 1 – Scott gets a takedown early, works from inside full guard. Scott postures up, lands a few nice punches. Caudill gets mounted and is trying to hold on. Scott locks on an arm triangle, moving to the side, but lets it go and returns to mount. Uses a one hand choke with punches, time is up. PMN scores Rd 1 10-9 for Scott.

Round 2 – Lights just went out. Leg kick from Caudill. Scott puts him on his back once again and starts with the ground and pound. Scott in half guard, holding Caudill down with a forearm on the neck. He gets full mount and pounds out Caudill who covers up and turns away. Completely domination.

Round 1 – Cook ties Carpenter up and pushes him to the cage. Carpenter gets a headlock on Cook but Cook picks him up for a hard slam that looks like it almost knocked him out. Cook finishes him off with several punches but this Dustin Ware student may have finished him with the slam alone. A big win for Cook in his MMA debut! And they rule it a KO due to slam.

Round 1 – Harris gets Napier to the ground quickly with a judo throw. Napier gets up but after a suplex Cody gets mount and knocks Napier out with punches very quickly. They call it a submission due to strikes.

Round 2 – Dunn slips on a front kick. Cook ties him up and puts Dunn down. Cook on top in half guard, moves to full mount rather easily. Cook softening Dunn up with some ground and pound, scoots him against the cage. Cook punches away until Dunn gives up his back. Cook locks on the choke and this fight si over — Cook is the new champ.

Round 1 – They tie up, Seals backs West into the cage. Seals looking for the trip as they struggle in the clinch. West with a couple body shots. Right hand from West, Seals dumps in with a big takedown and lands in side control where he then moves to mount. West sweeps but gets his arm caught in an omoplata. Seals cranks it and West taps out. Wow! Very impressive from the 4 Seasons fighter.

Round 1 – Williams shoots, pushes Brown to the cage. Williams gets the takedown. Brown gets to his knees and feet. Clinched. Brown with  a couple knees to the body. A couple more from the clinch, another one to the leg and some punches to Williams’ body. They remain in the clinch until the bell. Close round. PMN scores it 10-9 for Brown.

Round 3 – Williams shoots, stuffed. Clinch. Knees from Brown. Front kick from Brown after they separate briefly. Williams clinches up again. Big knee from Brown. Williams leaning on Brown. Brown backs out with a couple rights, knees to the thighs. Williams is not going to make it five rounds. He looks very tired, doubled over. PMN scores the round 10-9 for Brown.

Round 4 – Williams gets a takedown. Brown holding a front headlock. Williams just laying there not doing anything. Ref stands them up. Knee from Brown to the body, they trade big punches and Williams lands a couple nice ones before clinching up. Nice exchange, Williams got the better of it. Ref separates them. Nice right from Williams, knee from Brown. PMN scores the round 10-9 Williams.

Round 5 – They come out swinging and Williams lands a couple of nice rights. He pushes Brown to the cage. Knee from Brown. Williams leaning on Brown, turns him around and drives him across the cage for a takedown. Brown gets right up, clinched, knees from Brown and punches to the body. Brown hammerfisting Williams’ thighs and kneeing his thighs. Ref separates them. They throw a few punches before clinching and returning to the same position. PMN scores the round 10-9 for Brown and the fight 49-46 for Brown.

Round 1 – Stover gets his leg caught from a kick. Wade pushes him to the cage. Stover shoots, stuffed, but he has hold of one leg. After a stalemate Wade unleashes several hammerfists until the referee is forced to stop the fight.

Round 1 – Odem is from Clarksville, Tenn. Leg kick from Odem, shoots, gets a double leg on the first try. Contreras looking for a standing kimura as Odem hangs on, body blows from Odem before scoring a a takedown. Contreras bleeding from his eye, trying to get up. He gets to his feet and Odem is up as well. PMN scores the round 10-9 for Odem.

Round 1 -Thomas with a nice Pro MMA Now patch on his shorts. Leg kick from Thomas, he pushes Godfrey to the cage. Looking for the takedown. Godfrey gets a body lock, muscles Campbell to the cage. Gets the takedown. Postures up  as Thomas gets full guard. Thomas gets Godfrey’s arm in a scissors type lock. Godfrey escapes and Campbell has top position in half guard. Godfrey gets full guard. He throws his legs up as Thomas lands body shots. Godfrey looking for a kimura, uses it to sweep to full mount. Thomas gets half guard. Godfrey moves to side mount. Godfrey stands up. Ref lets Thomas up. Leg kick from Thomas. He shoots for a single. Nice reverse elbow from Thomas lands in the face of Godfrey. Thomas still holding the leg. Close round.

Round 2 – Touch gloves. Trade leg kicks. Right hand from Godfrey. Thomas shoots. Knee from Godfrey. Couple of elbows from Godfrey. Thomas gets Godfrey down but just barely as he gets right back to his feet. Thomas pushing Godfrey into the cage, still looking for the takedown. Godfrey defending well. Ref separates them. Godfrey lands a nice combo and Cambell dives in for a leg. Lets go and lays on his back. Godfrey calls him up. He lands an uppercut as Campbell shoots. Godfrey with some body shots then hammerfists to the face until the fight is over. Looks like the body shots may have hurt him.

Round 1 -Butcher comes out swinging. Combs with a spinning backfist, misses, Butcher pushes him to the cage but Combs gets a body lock takedown, inside Butcher’s full guard. Butcher sweeps as the crowd erupts. Combs makes it to his feet. Leg kick, eats a right, clinch. Combs pushes him to the cage. He backs out, misses a head kick. Butcher comes forward punching, gets dumped on his back with a slam. Combs inside full guard. Butcher throws up a triangle and Combs taps very quickly. Wow, very impressive win by Butcher who improves to 3-0 with three first round wins. The crowd erupts to the local hero’s win.