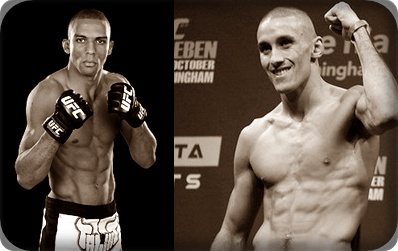 The UFC will be back in action this Saturday night from Rio de Janeiro, Brazil, with the UFC 142: Aldo vs. Mendes event. The main card will get underway with a lightweight bout between Brazil’s Edson Barboza and England’s Terry Etim in a fight that could easily take fight of the night honors. Let’s see how this one shakes out.

Edson Barboza comes into this fight with a career record of (9-0) with six wins via TKO/KO and one win via submission. He is coming off a very hard fought split decision win against Ross Pearson back at UFC 134 which also took place in his native Brazil. Barboza is a powerful muay thai striker with great takedown defense. However, he doesn’t fight well when someone crowds him or keeps him moving backwards.  He’s a purple belt in jiu-jitsu, but we haven’t seen much of his ground skills so it’s difficult to assess just how good his skills are in that area.

Terry Etim comes into this fight with a career record of (15-3) with 12 wins via submission and two via TKO/KO. Etim was last seen in action choking out Edward Faaloloto in 17 seconds back at UFC 138 after a year and a half away from fighting. Etim is a rangy fighter with decent striking ability, but his strength is his ground game as evident in the number of submission wins on his resume. Etim isn’t great at anything but does a lot of things well as a young fighter.

I would have to agree with those odds for the most part. Barboza has been more active as of late, is the better striker, and is probably good enough on the ground to avoid being submitted if Etim can get him there.

This fight is going to come down to if Etim can be effective enough striking to set up a takedown and put Barboza on his back to try and look for a submission. The problem for Etim is that Barboza has excellent takedown defense as I mentioned earlier. He has been taken down once in his UFC career and wasn’t on his back long at all. Barboza has excellent kicks that could be problems for the lengthy Etim, but they could present an opportunity for Etim to catch one and put Barboza down. Barboza will have to be weary of Etim’s guillotine choke in close quarters as he has shown that he’s not afraid to slap it on and pull guard.

Barboza has a two inch reach advantage even though he is the shorter fighter. I expect him to find his range and land heavy leg kicks and basically just outstrike Etim the whole fight. Etim is very difficult to finish and has never been knocked out in MMA so it’s very possible that this fight could go the distance. However, I expect it to be an exciting fight as both fighters have multiple UFC bonuses from the UFC.

I’m going with Barboza via decision.