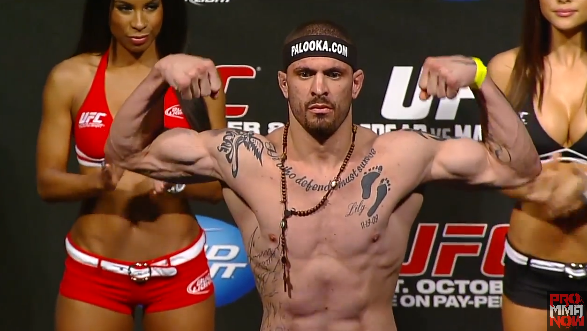 Ridgewood, New Jersey (USA): This Saturday at UFC 142 in Rio de Janeiro, Brazil, New Jersey-based middleweight Mike Massenzio (13-5) will face what many think is the stiffest competition of his young career when he enters the Octagon against Rousimar Palhares (13-3). It’s going to be a very tough fight, with Palhares in possession of a spectacular UFC record, and fighting on his home soil. The Massenzio-Palhares bout will be part of the Pay Per View-broadcasted main card.

Massenzio is coming off a huge come-from-behind victory over former WEC champion Steve Cantwell at UFC 136. After taking a bout on three-day’s notice against Krzysztof Soszynski at UFC 131 that resulted in a decision loss, the win over Cantwell was much-needed…and much-deserved. The 6’2” 185-pounder has now won two of his last three bouts, and will now look to take down a top name in Palhares.

Here’s video of Massenzio training for his UFC 142 bout: http://www.youtube.com/watch?v=GoFeDS8MZew

Regarding his thoughts on fighting Palhares, Massenzio said, “It’s a big step up. Palhares is one of the best in the world…he’s ranked number ten in a lot of polls, and he’s a deadly guy. But to be the best, you’ve got the beat the best. And I just want to fight the best.”

Sponsoring Massenzio for this all-important bout will be the MMA comic book “Joe Palooka” (Palooka.com) and Azad Watches (AzadWatch.com).

“This is our second time sponsoring Mike, and I have to say, I haven’t regretted one second of it. He’s a consummate professional that fights his heart out all the time, every time,” explained Joe Antonacci, “Joe Palooka” creator. “Win or lose, he puts it all on the line each time. In short, he fits PERFECTLY with what Palooka and Azad are all about.”

Here’s video of Joe interviewing Mike before his big bout this weekend: http://www.youtube.com/watch?v=RWfUEDbwc_0

Regardless of the result this Saturday, Massenzio will battle Palhares with every fiber of his being. He’s healthy, and ready to do just that.

“Joe Palooka” made its world premiere recently with the release of its first issue. Issues #1 & #2 are available for purchase for the first time anywhere at http://www.Palooka.com/, and hard copies of the issue will follow in early 2012. It was also announced that a special 15-page FREE-VIEW is available simply by signing up with an email address on http://www.Palooka.com/, and fans can also take advantage of a unique offer on “Joe Palooka” issues #1 and #2, which are available together for the low price of only $1.99.

Azad Watches have been worn by top celebrities such as Donald Trump, Eva Longoria, “Dr. J” Julius Erving, Ice Cube, Tony Bennett, Piers Morgan, Barry Bonds, Cedric the Entertainer, Lil’ Wayne, Mickey Rourke, and many others. The brand made its MMA debut recently at UFC 139, and will now take the next step in its development.